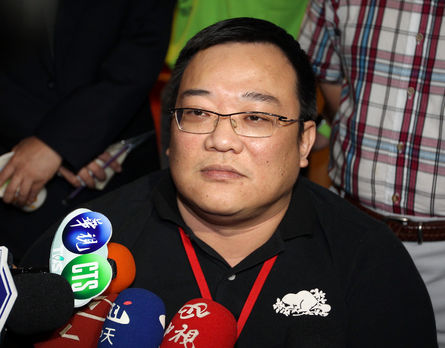 TAIPEI (Taiwan News) – Hung Chih-kun, the adviser to Taipei Mayor Ko Wen-je who was accused of leaking information to the media, received two demerits Tuesday.
Hung, a former Democratic Progressive Party official, was accused by an internal city government investigation of having leaked the content of the Clean Government Commission’s report about the Taipei Dome to several media outlets and to prominent talk show commentators. Hung is a member of the commission.
After he admitted to the leaks, Ko agreed that he should face sanctions by the city’s personnel department.
Despite demands by city councilors from both sides of the political spectrum for his dismissal, Hung received two demerits in a decision made Monday and confirmed by the mayor Tuesday.
Hung will temporarily be barred from attending meetings at the mayor’s office, reports said. Asked by journalists about the demerits, the city adviser said he accepted the measures and would bear his responsibility.
After an investigation by the city’s anti-corruption department fingered Hung, his removal from the city team was demanded by politicians from both the Kuomintang and the DPP. Some councilors described him as the “shadow mayor” and even hinted Ko might have known about the leaks beforehand, an allegation the mayor sharply denied.
The Hung case was a minor incident in the much wider controversy surrounding the Taipei Dome, which recently escalated into a full order by the mayor to stop work. Because of concern over the safety of the nearby Mass Rapid Transit line, construction was allowed to resume but only on those parts of the project closest to and directly related to the MRT.