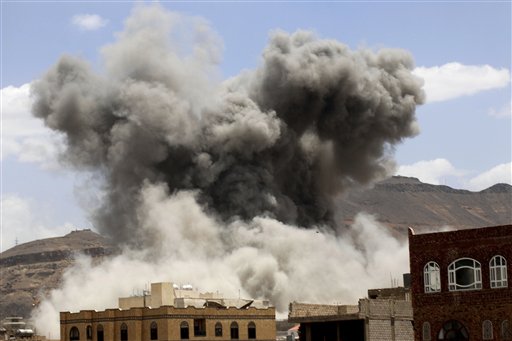 SANAA, Yemen (AP) — A United Nations-sponsored peace conference that was to take place at the end of the month has been indefinitely postponed, senior Yemeni politicians said.

The latest setback came as jets from the Saudi-led coalition on Monday pounded Shiite rebel positions in the capital and across the country.

The talks were to take place in Geneva on May 28 and aimed at a political settlement to end the armed conflict between Shiite rebels known as Houthis and the internationally recognized government now exiled in Saudi Arabia.

Three officials from the Houthi, socialist and unionist parties said late Sunday they were notified the talks had been postponed and that no new date had been set.

Houthis backed the talks and said they would participate, but exiled Yemeni President Abed Rabbo Mansour Hadi had demanded they first withdraw from cities they seized before being allowed to participate.

Houthi rebel leader Abdul-Malek al-Houthi had described talks as the only solution to the war. He boycotted an earlier conference hosted By Saudi Arabia demanding that peace negotiations be held in a neutral country.

There have been no peace talks since Saudi-led airstrikes began March 26, while fighting on the ground has pitted Hadi's forces against the Houthis and military units loyal to ousted President Ali Abdullah Saleh.

Warplanes fired missiles overnight at several army camps and weapon depots in Sanaa, the capital, in the northern Houthi stronghold of Saada and in the southern city of Aden. The airstrikes came a day after some of the heaviest bombardment carried out by the Saudi-led coalition in Sanaa.

The U.N. estimates that at least 1,037 civilians, including 130 women and 234 children, have been killed between March 26 and May 20. The cities of Saada and Aden have endured the most extensive damage to their infrastructure.