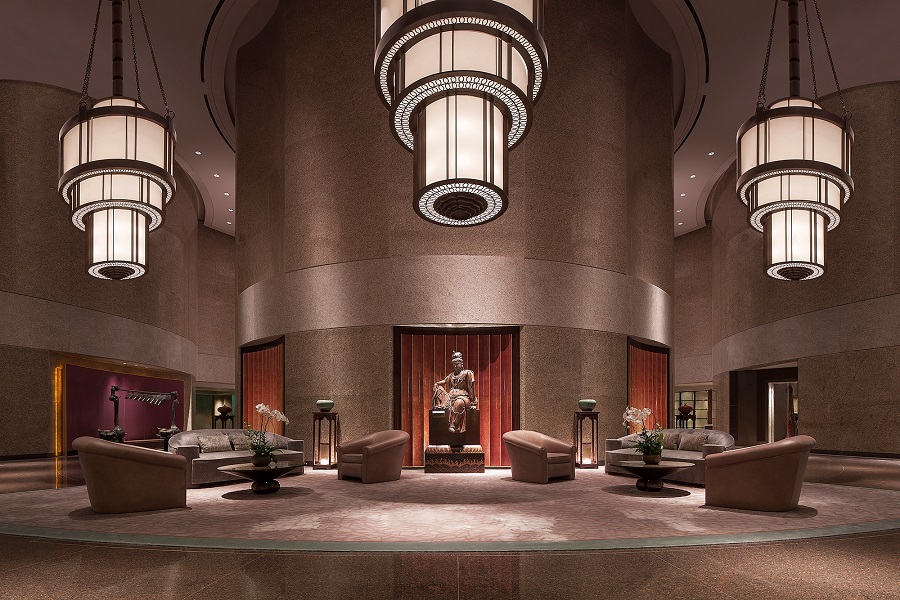 After details preparation and planning, Shangri-La’s Far Eastern Plaza Hotel, Taipei has completed its NT$1.5 billion renovation project, which includes 420 guestrooms, the Horizon Lounge, lobby, driveway and Lobby Court and The Cake Room on the lobby level, and is ready to reach new heights with a whole new appearance combined with the groups’ sincere hospitality from the heart.

“It is an exciting year for us as we are not only celebrating the 20th anniversary but also has completed our upgrade and enhancement program and I am proud that we have been able to maintain the hotels’ well-known “Song Dynasty” them with the timeless elegance design. We are exciting to share our happiness with the world,” said the hotel’s General Manager Marcel N.A. Holman.

Celebrating its 20th anniversary, the hotel has held a high profile on Thursday, 21 May to show its appreciation to the public for their long term support. As the sonorousness sound of drums filling the grand lobby, the event started with a festive atmosphere. All the guests enjoyed the joyfulness and were amazed by the beautiful painting “Along the River during Qing Ming Festival,” repainted by famous artist Shen Cheen.

The hotel also presented a new experience through virtue reality glasses, showcasing the newly renovated rooms, roof top swimming pool and city landscape from the lift. With the high-tech facilities and the virtue reality video, guests can truly experience the brand new hotel without personally visiting the venue.

With the elegant atmosphere in the newly refurbished lobby and genuine hospitality, Marcel Holman, the general manager of the hotel, led the service team to entertain hundreds of valuable guests including corporate clients, government officials, ambassadors and media. In addition, the Chairman of Far Eastern Group Douglas Hsu and the President & Chief Executive Officer of Shangri-La Hotels & Resorts Greg Dogan had also joined the event to witness this special moment.

During the party, the Chairman of Far Eastern Group Douglas Hsu expressed his satisfaction of the result and quality of the renovation, saying that the key to remain as the leading brand is to continue incorporating innovative ideas and utilizing latest technology to provide considerate and different hotel experiences to guests in every detail.

The President & Chief Executive Officer of Shangri-La Hotels & Resorts Greg Dogan also said that the Shangri-La group values the cooperation with the Far Eastern Group over the past 20 years and he looks forward seeing the relationship going from strength to strength.

Looking into the past 20 years, Shangri-La’s Far Eastern Plaza Hotel, Taipei has experienced many glorious moments. Not only it has been awarded by various media and organizations as a high-quality hotel but also it attracts many celebrities such as Former President of United States Bill Clinton, Movie Star Tom Cruise, Cate Blanchett, Film Director Ang Lee and more to stay when they visited Taipei.
With the genuine hospitality from the heart, the hotel is now marching for the up-coming years with a whole new appearance.

To provide upgraded services and in preparation for its 20th anniversary, the hotel had refurbished all 420 guestrooms, the Horizon Lounge, lobby, driveway and two food and beverage outlets on the lobby level. Following the extensive renovation, the hotel also partnered with Microsoft and Docceo to introduce “DigiJames,” a digitalized butler system that will open a new era for the hotel industry in Taiwan. The system has already presented in hotel’s signature suites and is scheduled to be implemented to all guestrooms, transferring the hotel into a “smart” accommodation venue.

As we understand the importance of digitalisation and the potential of smart living, we introduce the “DigiJames” system to offer digitalised personal butler services to our precious guests. The new technology platform integrates cloud and analytics technology powered by Microsoft Azure, connecting not only the hotel infrastructure in an Internet of Things (IoT) but also travellers with local communities by providing dining and shopping suggestions as well as tourism information.

With the new technology, the hotel has open a new era in hotel industry by playing “smart.” As all the room controlling features are networked into a single unifying portal under constant monitoring, the hotel is able to provide hospitality that is more considerate and subtle.

“In the fast-changing and competing industry, it is necessary for us to create a service that is not only professional, but also in line with modern life needs. It is a great pleasure to join hands with Microsoft and Docceo in upgrading our services to help us cope in a digitalised era. We have faith in the new system and are confident that our guests will feel satisfied with the digitalised butler,” said the hotel’s general manager, Marcel N.A. Holman.

The oasis for travelers

For many, Shangri-La’s Far Eastern Plaza Hotel, Taipei, has always left an impression of elegant and understated luxury, and provided guests a peaceful and serene space in which to relax amid the hustle and bustle of modern life. With the fan-shaped entrance, the hotel welcomes each guest warmly with open arms. Walking up the steps, a spacious lobby with a nearly 10-meter-high ceiling is decorated with a three-meter-long copper chandelier, reminding guests of the aesthetics and elegance of the Song dynasty in ancient China.

The reception area is embellished with carefully selected natural amazonita gemstones, and the theme of refined Chinese culture perpetuates through the air with Chinese artwork decorations on two sides of the wall. When checking in, guests can enjoy the re-interpreted artwork of “Along the River during the Qingming Festival” painted by Shen Cheen. The art piece depicts the busy and teeming street of the ancient capital in Kaifeng, which pictures every character, animal and architecture in details. The scene in the picture also symbolizes the prosperous Taipei City for travelers to indulge in during their Taipei trip as they enjoy the art piece.

The original Kwan-yin statue is now surrounded by a unique arrangement of warm lighting conveying a message of peace and reassurance. The wood-carved Kwan-yin statue is a mimic of the unique Song dynasty Kwan-yin, which is about 220 centimeters high with her right foot up and left foot down in a slightly inclined and contented posture. The image of Amitabha Buddha depicted on Kwan-yin’s crown adds a sense of peace and serenity to the statue.

Upgrading Elegance – Exclusive Horizon Lounge
Located on the 36th floor, the upgraded Horizon Lounge features a soft and elegant color tone of shimmering gray that offers an exclusive space for guests staying on the Horizon Club floors, where guests can enjoy breakfast and other privileges, such as daily snacks, beverages, a wide selection of magazines and newspaper and a personal concierge. Embracing a spectacular city view from above, the Horizon Lounge also offers two private meeting rooms to meet guests’ business needs.