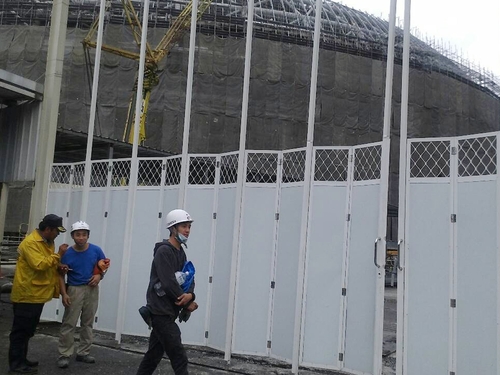 Following the order to suspend construction on the Taipei Dome Wednesday evening, the city government provided an official document Thursday morning stating that the dome is in violation of Article 58 of the Building Act, detailing the suspension is put into immediate effect.

The stop to the project was motivated by the threat it posed to the nearby Mass Rapid Transit Blue or Bannan Line and to a protected chimney at the former Songshan Tobacco Factory.

The city government’s decision had been hinted Wednesday when Mayor Ko Wen-je accused the Farglory Group of arrogance and said he might decide within two days whether or not to shut down construction.

In an open statement on Thursday morning, Taipei Deputy Mayor Teng Chia-chi and the city’s Department of Urban Development Commissioner Lin Jou-min said they will inform developers and construction supervisors at 2 p.m. for a round of discussion, adding that the city government will also dispatch an official to the site to monitor the cease of construction at 4 p.m.

There will be another round of discussion Friday morning between city officials and heads of developers and construction supervisors, including specialists from four different engineering unions in Taiwan, authorities said.