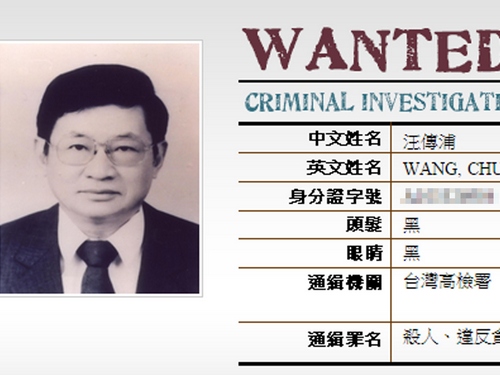 Taipei, May 19 (CNA) The Taipei District Prosecutors Office said Tuesday that it is dropping a case against the late Taiwanese arms broker Andrew Wang for his role in the death of a Navy officer in 1993.
The office said that Wang -- the key figure in the corruption scandal surrounding Taiwan's 1991 procurement of Lafayette-class frigates from France -- fled Taiwan in 1993, shortly after the suspicious death of Navy Officer Yin Ching-feng.
Yin is widely believed to have been murdered because he was ready to blow the whistle on those who took kickbacks in the frigate deal.
Wang lived in England for many years before dying of cancer in January at the age of 86.
"The office received Wang's death certificate from related agencies in London recently and has therefore decided to drop the case against him in Yin's case," the office said.
Despite Wang's death, the Special Investigation Division (SID) under the Supreme Prosecutors Office will continue to pursue Wang's illicit gains from the scandal.
The SID said the status of Wang's wife and his four children, who are wanted for their involvement in money laundering, will not change despite Wang's death.
The corruption and bribery case stems from a 1991 deal in which Taiwan's Navy bought six Lafayette-class frigates from French Thomson-CSF, since renamed Thales S.A., at the inflated price of US$2.8 billion.
The price included procurement kickbacks and bribes to facilitate the purchase.

(By Liu Shih-yi and Lilian Wu)