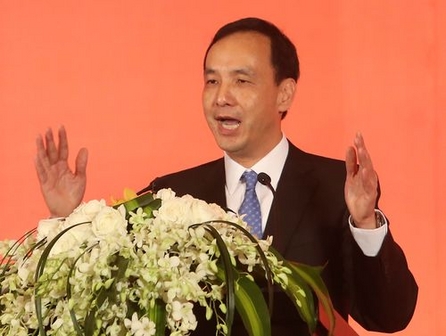 TAIPEI (Taiwan News) – Kuomintang Chairman Eric Liluan Chu reconfirmed his earlier statements that he would not run for president in an address after the end of the party’s primary registration process at 4 p.m. Saturday.
Commentators had widely predicted he might use the occasion to announce a bid for the presidency because of pressure from inside the KMT. Only three candidates registered to become the KMT candidate in the January 16, 2016, election, namely Legislative Vice Speaker Hung Hsiu-chu, former Health Minister Yaung Chih-liang and little-known Huang Po-shou, a former local official in Taoyuan City.
Chu called for true solidarity inside the party and said he was not afraid of being criticized for turning down the presidential candidacy. He said that in the three months since he had taken office as party leader, he had been working hard to reform the KMT. Chu said he would visit party elders and factional leaders to implore them to stand together behind the KMT.
He said that if the ruling party lost next January’s election, he would of course stand down as party chairman.
“The KMT can lose an election, but it cannot lose an entire generation, it can lose votes, but it cannot lose its core values,” Chu was quoted as saying at the event. He said that by becoming chairman and turning down a presidential bid, he might have angered many people and provoked criticism, but as chairman he would have to suffer those remarks.
In the next phase of the KMT primary process, the candidates have to register on Sunday or Monday while presenting the signatures of at least 15,000 party members. They will be able to present their views to the public from May 27 to June 5. However, in the opinion polls to be held from June 5 to June 13, the winning candidate will also need to receive the support of at least 30 percent of those polled before being nominated as the party’s presidential candidate. If no candidate achieves that level, the way could be open for the party to recruit a candidate directly.
A party congress scheduled for July 19 would bring the final ratification of the nominee.
In an interview published by the Chinese-language Apple Daily earlier Saturday, President Ma Ying-jeou reminded party leaders how he had turned down requests to run for mayor of Taipei City dozens of times in 1998, until he finally agreed because he saw it was in the interest of the party. Ma said that in the end, Chu should also take up his responsibility, reports said.
Hung and Yaung said they believed the KMT would continue along the primary process and not allow Ma to pick his own successor, a course of action the president denied he was doing.
Hung said she was planning to present between 50,000 and 60,000 endorsements at the KMT headquarters Sunday morning to complete her registration and move on to the next phase.