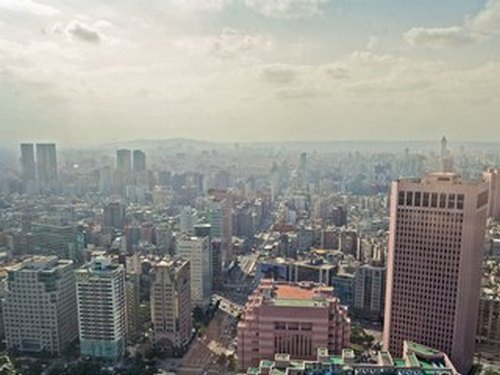 Taipei, May 14 (CNA) Shares of property developers in Taiwan came under pressure Thursday morning after the Executive Yuan raised the capital gains tax rates in a tax reform scheme targeting the skyrocketing local home market, dealers said.
Selling even spread to the financial sector amid fears that a likely slowdown in the property market due to the government's measures will have an adverse impact on banks that serve as the major mortgage providers, the dealers said.
As of 11:11 a.m., the construction sub-index had fallen 1.65 percent. Shares of Farglory Land Development Co. lost 2.10 percent to NT$39.65 (US$1.30), while shares of Hung Ching Development & Construction Co. fell 2.28 percent to NT$21.40.
The financial sector lost 2.41 percent, with shares of Fubon Financial Holding Co. down 3.92 percent at NT$63.80 and shares of Cathay Financial Holding Co. (???) down 3.07 percent at NT$53.60.
The weighted index on the Taiwan Stock Exchange was down 1.06 percent at 9,620.64 points. "Judging from the latest version of the tax reform scheme, the government is determined to curb the high-flying home prices in the local market," Ta Ching Securities analyst Andy Hsu said. "It is not surprising that investors were keeping their hands off construction stocks soon after the local bourse opened."
A day earlier, the Executive Yuan completed a review of a Ministry of Finance-proposed capital gains tax plan targeting the local property market as part of its efforts to rein in local property prices.
Under the latest version of the tax scheme after the Cabinet review, home sellers will face a 45 percent tax if they sell their property after having owned it for less than one year. In cases in which they have held the property for one to two years or two to 10 years, or more than 10 years, the tax rates will fall to 35 percent, 20 percent and 15 percent, respectively.
In the previous version, the tax rate was 35 percent for sellers who had owned their property for less one year. In cases where they had owned property for one to two years or two to 10 years, or more than 10 years, the rates would fall to 30 percent, 17 percent and 12 percent, respectively.
"Since the government intends to place a cap on local home prices, many investors fear that more measures will be introduced in the future, so it is possible that share prices of the local property sector could continue to face pressure," Hsu said.
He said that cautious sentiment toward the local property market also affected the financial sector Thursday morning.
"Once home prices fall, banks that have extended large housing loans could suffer losses," Hsu said. "Investors seized the negative leads to lock in profits they had built up in financial stocks in recent sessions," although financial holding companies reported an improvement in their bottom lines for the first four months of this year, he said.
Hsu said that due to the heavy losses incurred by the financial sector, the broader market had no chance to climb out of the current doldrums.
"It is possible that selling will escalate later in the day to send the index even lower," Hsu said.