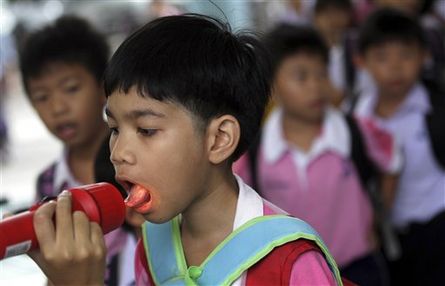 The CDC said parents should pay particular attention to their infants as they are especially vulnerable to the Coxsackie A virus, stressing that last week alone the number of patients increased three-fold.

“As we are entering the months of summer, we found that within a community, 64 percent of our patients were diagnosed with the Coxsackie A virus, a type of enterovirus disease especially endemic to newborns and infants,” Director of CDC Liu Ding-ping pointed out.

The Type B5 Coxsackie virus was detected in one of its patients earlier this year, a disease Liu said the CDC will keep monitoring to see if it becomes endemic, adding that so far no one has contracted the Type 71 enterovirus, which is a highly contagious disease that can cause severe complications.

According to the CDC, the number of patients seeking emergency treatment for enterovirus symptoms has increased significantly over the last 18 weeks of consultations. In the first week of April, there were 314 emergency consultations, followed by 307 in the second week, then 427 and 465 respectively. Meanwhile, the weekly number of enterovirus patients nationwide over the past four weeks ended May 9 was as follows: 5,426, 6,672, 8,025, and 10,340.

Medical attention should be sought immediately in cases where a child develops symptoms of the virus, such as a persistent fever, drowsiness, lethargy or continuous vomiting, the CDC said.