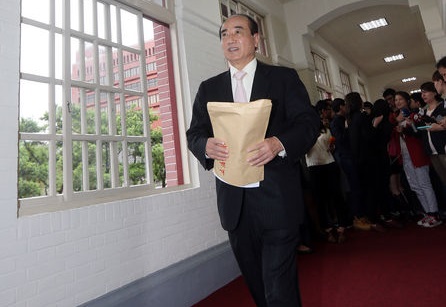 TAIPEI (Taiwan News) – Against expectations, Legislative Speaker Wang Jin-pyng did not turn up Wednesday to register for the Kuomintang presidential primary, with media speculating he was facing strong opposition from within the ruling party.
For some weeks, reports have hinted that Wang might try to become the KMT candidate in the January 16 presidential election.
As registration officially ends later this week, expectations have mounted, with some media reports saying that he would turn up at the KMT headquarters on Wednesday.
After a visit by Taipei City Mayor Ko Wen-je to the Legislative Yuan planned for Tuesday afternoon was canceled, new unconfirmed reports Wednesday said that “someone inside the KMT” opposed Wang’s presidential aspirations, forcing him to at least postpone his registration.
While no names were mentioned in the initial reports, it was understood that President Ma Ying-jeou might be the one objecting to Wang’s candidacy. Both men have long been considered as each other’s rivals, and their relationship plunged to a new depth when prosecutors accused the legislative speaker of illegally using his influence to change a court case.
Ma tried to have Wang ousted from the party and from the Legislative Yuan after the allegations broke into the open in September 2013, but the speaker won each step of his legal case, with the KMT abandoning its efforts earlier this year.
According to the Chinese-language Next Magazine, Wang wants to create a climate of solidarity to allow the KMT to win next year’s presidential and legislative elections against the odds.
While his sympathizers at the Legislative Yuan and in irrigation, fishermen’s and farmers’ associations were ready to come out and throw their support behind him, he still needed some time to overcome the antagonism of Ma supporters and unite the party behind his bid, the magazine reported.
Because most KMT heavyweights have recently performed poorly in opinion polls pitting them against Democratic Progressive Party Chairwoman Tsai Ing-wen, some KMT politicians still want the party to persuade chairman Eric Liluan Chu to change his mind and run for president as he is the most popular in the party.
Former Health Minister Yaung Chih-liang and Legislative Vice Speaker Hung Hsiu-chu have already registered and said they want to complete the primary process without withdrawing their bids if Chu or anybody else joins the race.
Another early favorite, Vice President Wu Den-yih, has said he will not run for president.