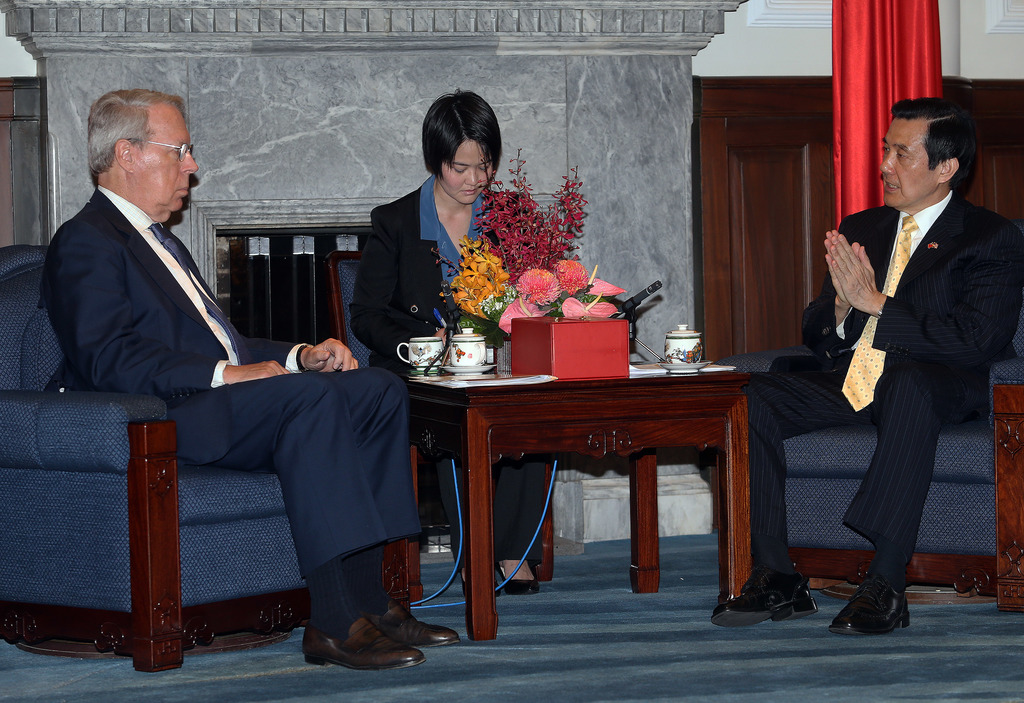 President Ma Ying-jeou on Monday reiterated his cross-strait policy of using the "1992 consensus" as the basis for maintaining the peaceful status quo between Taiwan and China.
In a meeting with Raymond Burghardt, chairman of the Board of Trustees of the American Institute in Taiwan (AIT), Ma said the basic cross-Taiwan Strait policy of the Republic of China is to continue the peaceful development of ties between Taiwan and China based on the 1992 consensus.
The 1992 consensus is a tacit agreement reached in Hong Kong in 1992 between Taiwanese and Chinese negotiators that there is only one China but both sides are free to interpret what that means.
Ma said that in the seven years he has been president, he has abided by the 1992 consensus, the existence of which was confirmed recently by several historical documents.
People should understand that "the 1992 consensus is actually the best model to defend the sovereignty of the Republic of China and the dignity of Taiwan," Ma said. "It is crucial to maintaining the status quo."
In an interview with the Wall Street Journal on Sunday, Ma addressed criticisms of his administration's approach to cross-strait affairs and the link that has been made between its policy and the ruling Kuomintang's (KMT's) defeat in last year's local government elections.
"It has been nearly seven years since we came to power and our mainland [China] policy has been criticized by some people over this entire period," Ma said in the interview published Monday.
"But our election defeat last year was not related to our mainland policy," he said. "The defeat was largely due to domestic issues." He blamed the defeat on the effects of the 2008 global financial crisis on the local economy, coupled with the repercussions resulting from domestic reforms, from capital gains tax to food safety.
However, Ma said, the government has transformed Taiwan's relationship with China from one marked by confrontation and conflict into one marked by negotiation and rapprochement, creating peace that was rarely seen across the Taiwan Strait.
"If the mainland China policy we have followed for the past seven years was such a great failure, and if the people were truly against it, why is it that the opposition party's presidential candidate declared her mainland China policy objective to be 'maintaining the status quo'?" Ma said.
He was referring to a statement on May 8 by opposition Democratic Progressive Party Chairwoman Tsai Ing-wen, the DPP's 2016 presidential candidate, who said that maintaining the status quo with regard to cross-Taiwan Strait relations is to maintain peace in the strait so that both sides can pursue opportunities for future development under the premise of peace and stability.
Tsai said at the time that cross-strait relations are crucial to Taiwan's interests and future, and that political parties and politicians should not use the issue to manipulate elections.

(By Claudia Liu and Jeffrey Wu)