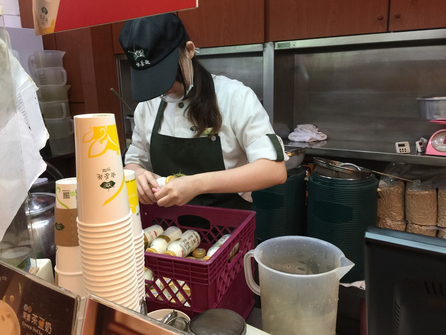 TAIPEI (Taiwan News) – Health inspectors found excessive levels of pesticides in a black tea supplied by popular chain Ten Ren Tea but imported from Vietnam, reports said Tuesday.
The find announced by the Food and Drug Administration was the latest in a series of food safety scandals surrounding tainted tea and rose leaves used in tea drinks sold at major chain stores.
The black tea sold at a store in Taichung City owned by Easy Way International Co., Ltd. showed a level of the insecticide fipronil at 0.003 parts per million, higher than the officially allowed maximum of 0.002 ppm, officials said.
Easy Way’s 24 outlets or franchisees had bought 192 kilograms of the product from Ten Ren last March, reports said.
All the product in question had been removed from sale, while Ten Ren had requested a new round of tests on the tea leaves, reports said.
Excessive levels of the insecticide fipronil or residues of the banned pesticide DDT have been found in several tea products from various prominent tea drink chains recently. In most cases, the tea or rose leaves affected had been imported, with one case where the labels indicating their origin had even been falsified, reports said.