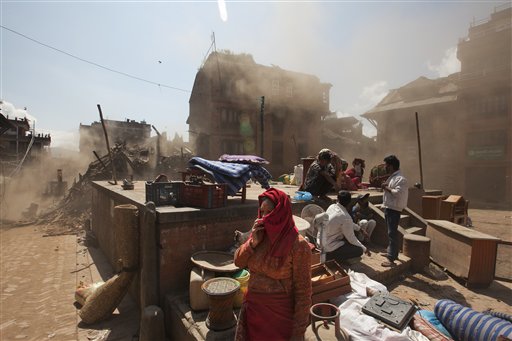 KATHMANDU, Nepal (AP) — Nepal's government will need immense international support as the Himalayan nation begins turning its attention toward reconstruction in the coming weeks, in the wake of the devastating April earthquake, a top official said Monday.

Nepal is one of the world's poorest nations, and its economy, largely based on tourism, has been crippled by the earthquake, which left more than 7,300 people dead. While there are no clear estimates yet of how much it will cost to rebuild, it will certainly be enormously expensive.

He also said foreign rescue workers were welcome in Nepal, saying they could remain as long as they are needed. He had earlier said that the need for their services was diminishing, but later denied that he wanted them to leave the country.

Soon, he added, the nation will be shifting away from a rescue mode and "will be concentrating more on relief operations."

Since the April 25 earthquake, 4,050 rescue workers from 34 different nations have flown to Nepal to help in rescue operations, provide emergency medical care and distribute food and other necessities. The still-rising death toll from the quake, Nepal's worst in more than 80 years, has reached 7,365, police said.

The head of the World Food Program ended her visit to Nepal and the WFP so far has dispatched food for 250,000 people in some of the hardest-hit areas, the spokesman for the U.N. secretary-general, Stephane Dujarric, told reporters Monday. The agency warned that basic aid is still needed, especially for people living without shelter.

Meanwhile, Buddhists turned out to visit shrines and monasteries to mark the birthday of Gautam Buddha, the founder of Buddhism.

At the base of the Swayambhunath shrine, located atop a hill overlooking Kathmandu, hundreds of people chanted prayers as they walked around the hill where the white iconic stupa with its gazing eyes is located.

Some of the structures around the stupa, built in the 5th century, were damaged in the quake. Police blocked off the steep steps to the top of the shrine, also called the "Monkey Temple" because of the many monkeys who live on its slopes.

"I am praying for peace for the thousands of people who were killed," said Santa Lama, a 60-year-old woman. "I hope there will be peace and calm in the country once again and the worst is over."

The airport was built to handle only medium-size jetliners, but not the large military and cargo planes that have been flying in aid supplies, food, medicines, and rescue and humanitarian workers, said Birendra Shrestha, the manager of Tribhuwan International Airport.

There have been reports of cracks on the runway and other problems at the only airport in Nepal capable of handling jetliners.

"You've got one runway, and you've got limited handling facilities, and you've got the ongoing commercial flights," said Jamie McGoldrick, the U.N. coordinator for Nepal. "You put on top of that massive relief items coming in, the search and rescue teams that have clogged up this airport. And I think once they put better systems in place, I think that will get better."

He said the bottlenecks in aid delivery were slowly disappearing, and the Nepalese government eased customs and other bureaucratic hurdles on humanitarian aid following complaints from the U.N.