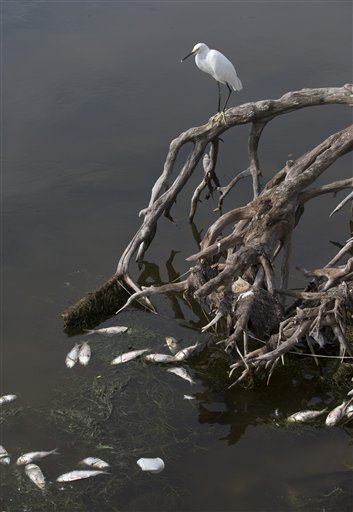 RIO DE JANEIRO (AP) — A Brazilian state environmental secretary has plunged into the polluted waters of Guanabara Bay as part of a televised stunt meant to assuage worries about health risks faced by sailors competing in the 2016 Olympics.

The secretariat confirmed Monday it was indeed Andrea Correa, Rio de Janeiro state's top environmental official, who dove into the bay for "Fantastico," a program broadcast a day earlier on the Globo television network.

Footage showed the fully clothed secretary leaping off the back of a boat, taking a few strokes and holding up a handful of water to the cameras.

"You can swim here just like in Ipanema or Barra," Correa said from within the water, referring to two Rio beaches favored by bathers.

The segment came a week after the program aired an expose critical of the extent of water pollution in Rio — where poor sewage and trash collection systems mean that much of the city's garbage and waste flows, raw, into the bay as well as area rivers, lakes, lagoons and even many of the city's world famous beaches.

The "Fantastico" episode stressed that Correa selected both the time and place of his plunge, saying that the official chose to swim at high tide, when clean ocean water is sucked into the bay, at a spot near the mouth of the bay with the biggest inflow.

The government has been criticized for failing to make good on pledges to clean up the bay and other Olympic waterways. The cleanup had been touted as a legacy that would endure long past the 2016 games. But with evidence mounting that little progress has been made, officials from Rio's governor to the mayor have acknowledged there's no way the water will be clean ahead of the Olympics.

Athletes repeatedly have warned that contact with the water could potentially harm the Olympians' health. They've also sounded alarm bells about the floating trash, which they say could derail competitors' medal ambitions by getting caught on the boats or even cause potentially catastrophic collisions.

Late last month, the governing body of world sailing threatened to move all of its Olympic events out of the bay and into the open ocean water.