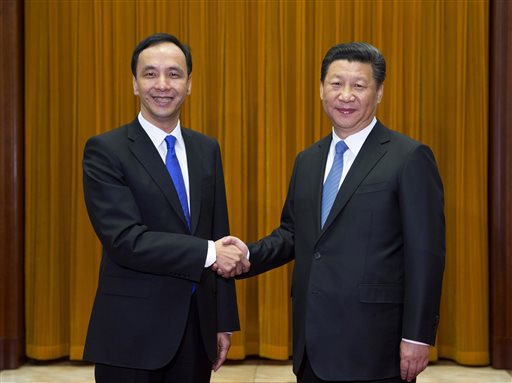 BEIJING (AP) — The head of Taiwan's ruling Nationalist Party called for more chances for the island to participate in international organizations after a meeting Monday with Chinese President Xi Jinping, whose government views the territory as a renegade province.

Eric Chu also affirmed his party's support for a consensus reached between Chinese and Taiwanese negotiators in 1992 that is interpreted by Beijing as a commitment to eventual unification.

That stance is held as sacrosanct by China but has become increasingly unpopular among young Taiwanese who see their island as an independent country.

Illustrating the matter's delicacy, the party issued a statement saying that the "'92 consensus" was the basis for dialogue, but that its exact meaning was open to interpretation.

"We hope exchanges can deepen between the sides, and that on the basis of the "92 consensus,' Taiwan will in future have even more international space to develop and even more opportunities in international organizations and activities," the statement said.

The sensitive unification issue is expected to feature prominently in next year's Taiwanese presidential elections, in which Chu is considered a likely candidate.

Speaking to reporters after his meeting with Xi, Chu said that Taiwan hopes not only to have "space to participate but also to join hand in hand and together create a win-win situation with the other side of the (Taiwan) strait" in the economic, environmental and other fields.

Chu, a former accounting professor and mayor of Taiwan's New Taipei City, spoke at a news conference following his talks with Xi. No Chinese officials attended the event, a reminder of the culture gap between China's authoritarian one-party system and Taiwan's freewheeling democracy.

The Nationalists were driven to Taiwan by Mao Zedong's Communists during the Chinese civil war in 1949, leading to decades of hostility between the sides. Chu, who took over as party leader in January, is the third Nationalist chairman to visit the mainland and the first since 2009.

Relations between the sides began to warm in the 1990s, partly out of their common opposition to Taiwan's formal independence from China, a position advocated by the island's Democratic Progressive Party.

While Beijing prefers to deal with the Nationalists exclusively, it has agreed to some degree of official talks between the two governments.

The United States on Monday welcomed "steps on both sides of the Taiwan Strait to reduce tensions" and urged both Beijing and Taipei to continue constructive dialogue.

"Of course, as to the content and pace and scope of those interactions, it should be acceptable to people on both sides of the Strait, but we leave those details to the people participating," State Department spokesman Jeff Rathke told reporters in Washington.

Exchanges between the sides are laden with symbolism and Chu's schedule included a visit to the grave of Sun Yat-sen, the father of modern Chinese democracy who is revered by both the Communists and the Nationalists.

Chu also affirmed Taiwan's desire to join the proposed Chinese-led Asian Infrastructure Investment Bank. China doesn't want the island to join using a name that might imply it is an independent country.

Chu said the island would continue to insist on joining the bank as "Chinese, Taipei," the name under which it participates in the Olympics and other major sporting events.

Chu's comments during his meeting with Xi were carried live on Hong Kong-based Phoenix Television.