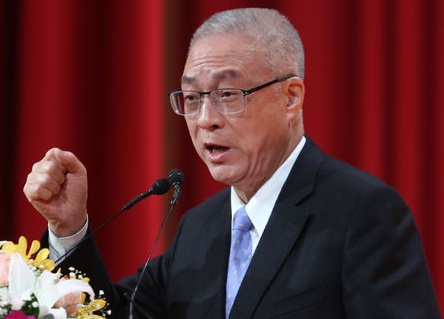 TAIPEI (Taiwan News) – Vice President Wu Den-yih on Saturday gave the first clear indication that he would not be picking up a registration form in the hope of becoming the Kuomintang presidential candidate in the January 16 election.
The process is open until mid-May, and until now only Legislative Vice Speaker Hung Hsiu-chu and former Health Minister Yaung Chih-liang have filled out the forms. Both have said they would take part in primaries, but some of the biggest KMT heavyweights have still not made their intentions clear.
Wu was visiting a Buddhist gathering in Taichung Saturday morning when he was asked whether he would visit the KMT headquarters to take a registration form, but he answered with a short and direct no.
Before the KMT’s devastating defeat in last November’s local elections, Wu had been seen as one of the frontrunners for the ruling party’s presidential nomination, together with then-Taipei City Mayor Hau Lung-bin.
After the election however, opposition Democratic Progressive Party leader Tsai Ing-wen became the undisputed frontrunner, both in her own party whose nomination she later won, and against most KMT contenders.
Virtually the only politician on the KMT side who performs reasonably well against Tsai is party chairman Eric Liluan Chu, but he has repeatedly said he would not run but serve out his term as mayor of New Taipei City.
Chu began a weekend trip to China Saturday which will take him to a meeting with the country’s president and Communist Party leader Xi Jinping Monday. Many observers are still expecting him to change his mind and run after all.
Another likely presidential hopeful is Legislative Speaker Wang Jin-pyng, who went to visit former President Lee Teng-hui Saturday morning, but he still has not clearly said if or when he would register.