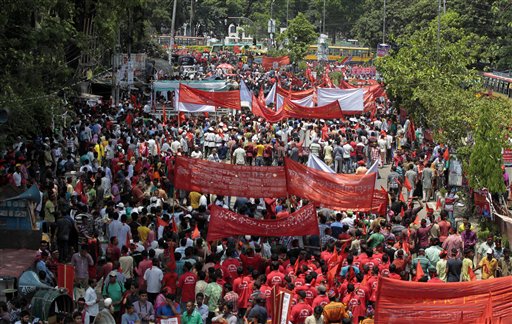 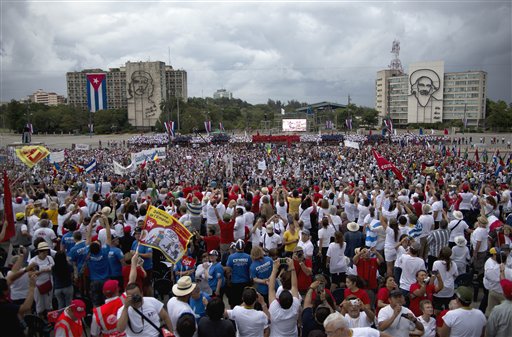 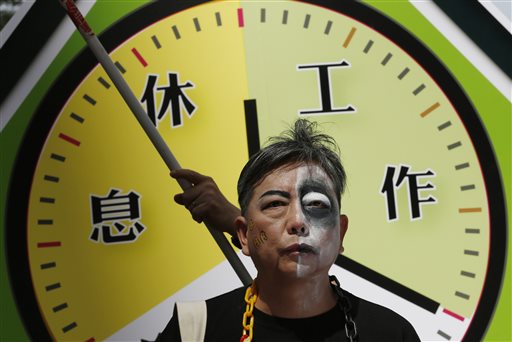 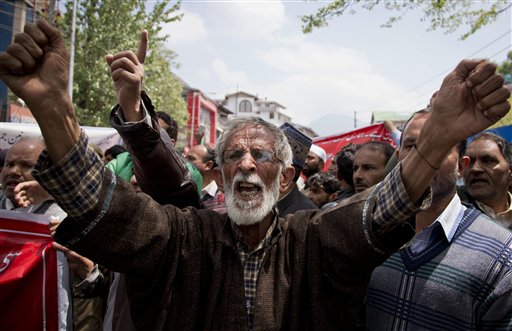 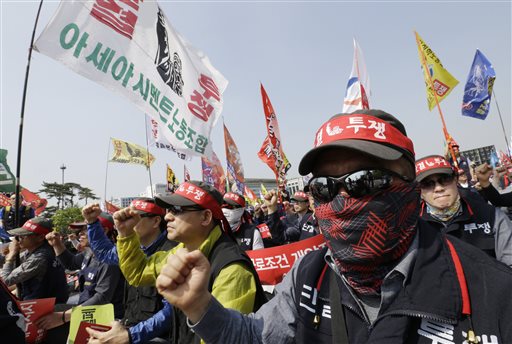 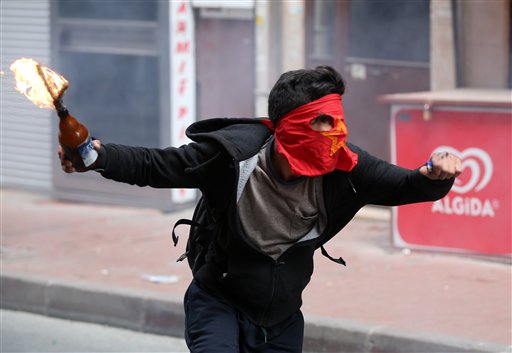 Most events were peaceful protests for workers' rights and world peace. But May 1 regularly sees clashes between police and militant groups in some cities.

International Workers Day originates in the United States. American unions first called for the introduction of an eight-hour working day in the second half of the 19th century. A general strike was declared to press these demands, starting May 1, 1886. The idea spread to other countries and since then workers around the world have held protests on May 1 every year, although the U.S. celebrates Labor Day on the first Monday in September.

Here's a look at some of the May Day events around the world:

Police and May Day demonstrators clashed in Istanbul as crowds determined to defy a government ban tried to march to the city's iconic Taksim Square.

Authorities have blocked the square that is symbolic as the center of protests in which 34 people were killed in 1977.

Turkish newswires say that 10,000 police officers were stationed around the square Friday.

The demonstrations are the first large-scale protests since the government passed a security bill this year giving police expanded powers to crack down on protesters.

Thousands of people converged on Havana's Plaza of the Revolution for the traditional May Day march, led this year by President Raul Castro and Venezuelan President Nicolas Maduro. After attending Cuba's celebration, Maduro was to fly back to Caracas to attend the May Day observances in his own country.

The parade featured a group of doctors who were sent to Africa to help in the fight against Ebola. Marchers waved little red, white and blue Cuban flags as well as posters with photos of revolutionary leader Fidel Castro, his brother Raul, and the late Venezuelan leader Hugo Chavez.

Additional marches were held in major cities around the island, including Santiago and Holguin in the east.

Thousands of people marched in the capital Seoul on Friday for a third week to protest government labor policies and the handling of a ferry disaster that killed more than 300 people a year ago.

South Korean labor groups have been denouncing a series of government policies they believe will reduce wages, job security and retirement benefits for state employees.

More than 10,000 workers and activists marched in Manila and burned an effigy of Philippine President Benigno Aquino III to protest low wages and a law allowing employers to hire laborers for less than six months to avoid giving benefits received by regular workers.

Although it is the highest rate in the country, it is still "a far cry from being decent," says Lito Ustarez, vice chairman of the left-wing May One Movement.

In financially struggling Greece, an estimated 13,000 people took part in three separate May Day marches in Athens, carrying banners and shouting anti-austerity slogans. Minor clashes broke out at the end of the peaceful marches, when a handful of hooded youths threw a petrol bomb at riot police. No injuries or arrests were reported.

Earlier, ministers from the governing radical left Syriza party joined protesters gathering for the marches, including Finance Minister Yanis Varoufakis — who was mobbed by media and admirers — and the ministers of labor and energy.

Police in Berlin say the traditional 'Walpurgis Night' protest marking the eve of May 1 was calmer than previous years.

Several thousand people took part in anti-capitalist street parties in the north of the city. Fireworks and stones were thrown at police, injuring one officer. Fifteen people were detained. Elsewhere in the German capital revelers partied "extremely peacefully," police noted on Friday morning.

At noon, Green Party activists unveiled a statue at Alexanderplatz in central Berlin of Edward Snowden, Julian Assange and Chelsea Manning, considered heroes by many on the left for leaking secret U.S. intelligence and military documents. The statue, called "Anything to say," depicts the three standing on chairs and is scheduled to go on tour around the world, according to the website http://www.anythingtosay.com/.

In the central German city of Weimar far-right extremists attacked a union event. Police said 15 people were injured and 29 were arrested.

In Moscow, tens of thousands of workers braved chilly rain to march across Red Square. Instead of the red flags with the Communist hammer and sickle used in Soviet times, they waved the blue flags of the dominant Kremlin party and the Russian tricolor.

Despite an economic crisis that is squeezing the working class, there was little if any criticism of President Vladimir Putin or his government.

The Communist Party later held a separate march under the slogan "against fascism and in support of Donbass," with participants calling for greater support for the separatists fighting the Ukrainian army in the Donbass region of eastern Ukraine.

In Milan, police released water from hydrants against hundreds of demonstrators, many of them scrawling graffiti on walls or holding smoky flares during a march in the city, where the Italian premier and other VIPs were inaugurating Expo, a world's fair that runs for six months.

An hour into the march, protesters set at least one parked car on fire, smashed store windows, tossed bottles and chopped up pavement.

Italian labor confederation leaders held their main rally in a Sicilian town, Pozzallo, where thousands of migrants from Africa, the Middle East and Asia have arrived in recent weeks after being rescued at sea from smugglers boats. Hoping to settle for the most part in northern Europe, the migrants are fleeing poverty as well as persecution or violent conflicts in their homelands.

Around 10,000 protesters gathered under sunny skies in Madrid to take part in a May Day march under a banner saying "This is not the way to come out of the financial crisis."

Spain's economy is slowly emerging from the double-dip recession it hit at the end of 2013, but the country is still saddled with a staggering 23.8 percent unemployment rate.

"There should be many more of us here," said demonstrator Leandro Pulido Arroyo, 60. "There are six million people unemployed in Spain, and many others who are semi-unemployed, who although they may be working don't earn enough to pay for decent food."

Rallies in Warsaw were muted this year after Poland's weakened left wing opposition held no May Day parade.

Only a few hundred supporters of the Democratic Left Alliance, or SLD, and of its ally, the All-Poland Trade Union, gathered for a downtown rally Friday to demand more jobs and job security.

President Dilma Rousseff skipped her traditional televised May Day address, instead releasing a brief video calling attention to gains for workers under her leadership.

In the video, Rousseff says the minimum wage grew nearly 15 percent above the rate of inflation from 2010-2014. Her office said the choice to roll out several short videos via social media Friday was aimed at reaching a younger public.