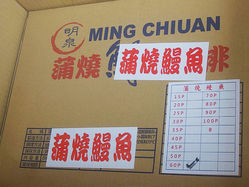 Malachite green was found in several batches of processed and half- processed eels by a group of investigators led by the Taoyuan prosecutors office and health bureau on April 28.

Investigators have confiscated 3 tons of eels that were contaminated with malachite green, an organic compound meant for veterinary use, are proven hazardous to humans. Luckily, the batches of tainted eels were found before they went on the shelves.

Taoyuan City-based Ming Chuan International is a processed fishery and well-established eel export company. In the beginning of March, another famous export-based fishery dealer in Tainan ordered 5 tons of eels from Ming Chuan. Hence, Ming Chuan bought 5,000 kilograms of live eels from some inland fisheries in Yunlin. However, Ming Chuan did not wait for the test results; they went ahead with the processing procedure and shipped the batch of eels off to their Tainan customer.

However, after the final test results came out, the batch of eels was later returned to Ming Chuan because of malachite green contamination. Ming Chuan did not report to the local health bureau, instead, it continued to process the tainted eels and planned to sell them in Taiwan.

Further investigations will be held to unearth which inland fisheries were using malachite green.