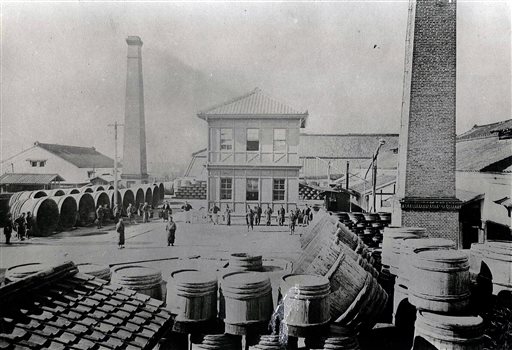 KYOTO, Japan (AP) — Successful businesses shine for a few years, then nimbler competitors outwit them in a constant cycle that spans being feted to forgotten in less than a generation. But Japan has something different: thousands of companies that have prospered for centuries.

Japan has more old companies than any other developed nation. A study of 41 countries carried out by the Bank of Korea found that Japan has more than half of the known pool of companies older than 200 years.

The longevity of Japanese businesses, from a 378-year-old sake maker to a four-century-old construction company that started in temple carpentry, partly has roots in the country's hermetic history. Limited contact with the outside world nurtured a distinctive culture valuing loyalty and continuity. Since the mid-19th century, when American pressure prized open Japan to the Western world, those traits provided an anchor as commercial life was confronted with innovations and pressures from abroad.

David E. Weinstein, an expert on the Japanese economy and chair of the Department of Economics at Columbia University, said nowadays business failures are as commonplace in Japan as anywhere else, but love of tradition can be a lifeline for companies with historical cachet.

Japanese family businesses have also adopted heirs outside the family, such as in-laws and talented workers, to ensure survival, he said. "It's the name that is continuing," said Weinstein. "People get attached to the names."

Sake-maker Gekkeikan, founded in 1637, was tiny for its first 250 years but grew to one of Japan's biggest liquor makers in the early part of the 20th Century by coming up with technology to keep sake fresh without chemical preservatives, ahead of its rivals.

The company, based in the picturesque ancient capital of Kyoto, is a balancing act between the old and the new, a defining characteristic of Japan's old companies.

Although Gekkeikan is developing new products constantly, such as sugar-free sake and nonalcoholic sake, it's basically making sake the old-fashioned way, stirring the giant caskets with loving care.

When the current 14th generation president Haruhiko Okura decided to define Gekkeikan's age-old corporate principles in 1997, he did it in English — "quality," ''creativity" and "humanity."

But employees are still being ordered to live stoically, shunning sports cars and other flamboyant lifestyles, instead sweeping neighborhood streets as volunteers, an old community practice.

Sumitomo Corp., a trading company technically founded in 1919, dates back to the 17th century, when its history is traced to merchant Masatomo Sumitomo's starting a bookstore in Kyoto.

In contrast, Western companies appear to be less enduring. Of the original 1955 Fortune 500 companies, only 71, or 14 percent, survived on the list, according to business consultant Jim Collins, who studied it in 2008, although that doesn't mean companies who disappeared from the list died.

Such companies thrived over the years because they created new demand while sticking to a corporate culture that promoted craftsmanship with attention to detail, the report said.

And instead of going after Western-style short-term results, they pursued longstanding trust with customers and partners, the study said. They also pursued growth within their means, rarely borrowing to expand.

Osaka-based contractor Takenaka Corp., which today constructs stadiums and shopping malls, had its beginnings in 1610, with Takenaka Tobei Masataka, a temple carpenter. That's 288 years before Warren A. Bechtel started building with a rented steam shovel to found Bechtel Corp., one of the oldest American companies.

Nintendo Co., the game maker behind Super Mario, is 126 years old, and began in 1889 by selling decks of traditional playing cards. Yagisawa Shoten Co., a soy-sauce maker founded in 1807, survived the March 2011 giant tsunami of northeastern Japan, turning to modern-day crowd-funding to build a new plant from scratch.

The companies, dating back to the samurai era, are so numerous there's a special term for them — "shinise," which combines the characters for "old" and "store."

The term connotes the pinnacle of taste, such as supplying the Emperor, a bragging right resonating with the Japanese consumer, even today. Gekkeikan, the sake-maker, notes proudly it received its first imperial order in 1907.

"Japan has its love for luxury-brand shoes and bags, which exists in the West as well, but in Japan it extends to food — a desire to eat famous things. As a result, there are lots more companies considered shinise in Japan," he said.

Minoya Kichibee Store is among the oldest of shinise, founded about 450 years ago, when a samurai, Azai Kichibee, became a merchant. The exact year is unknown.

The manufacturer still has only 100 employees, and its star product, super-salty squid in a bottle, is unlikely to go over with non-Japanese but is a perennial favorite here, especially with sake-drinkers.

The hotel business is another shinise forte, offering a unique family-like experience for travelers.

Guinness World Records has certified Nisiyama Onsen Keiunkan, a hot-springs inn operating since 705 in Japan, as the world's oldest hotel.

Hiiragiya inn is not as old, founded in 1818, but it also boasts an elegant tradition.

The bath tubs in each room are fragrant wood and lacquer. The small buckets are handcrafted by a master designated a National Treasure. The food served for dinner looks like artwork, served in tiny decorative portions in expensive ceramic. The screen windows peer out to a garden of rocks and foliage. A sumi-brush painting hangs in the alcove. The lighting is soft and muted. Workers shuffle about in kimono.