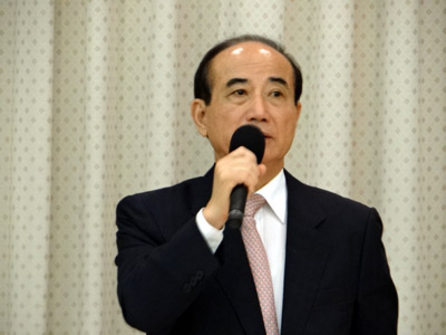 With the deck clear after the Supreme Court returned the KMT’s appeal of its ruling on Wang Jin-pyng’s party membership suit, Wang said he will make an announcement on his feelings on a run for the presidency in January. The court had asked the KMT for clarification within ten days of a number of points in its appeal of the decision, but after receiving no reply from the party and chairman Eric Liluan Chu, the party’s appeal was sent back to the lawyers.

With his announcement speculation quickly arose that Wang will become the third person to declare for the KMT nomination, joining Legislator Hung Hsiu-chu, who is Deputy Speaker of the Legislative Yuan, and former Minister of Health Yang Chih-liang. Another name frequently mentioned as a candidate, Vice-President Wu Den-yih, was still hesitant to make a stand on whether he is throwing his hat in the ring for 2016.

Supporters of Wang Jin-ping have said they are ready to mobilize a campaign to gather signatures to back Wang’s application for the primary. One Wang supporter said efforts to collect the needed 30,000 signatures needed to apply would focus on the southern part of Taiwan where most of his supporters are located, saying nothing was needed in the north because "the south is enough."