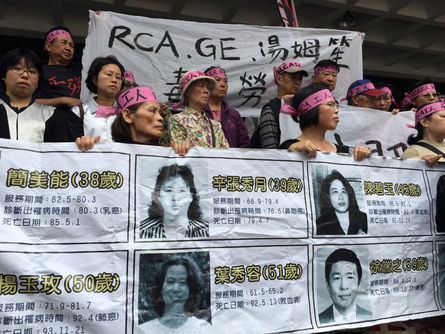 Taiwan district court on April 17 ordered RCA Corporations to pay NT$560 million (US$18 million) in damages to its former workers and their families who are victims of what has been described as the worst work-related health case in the history of the country.

More than 200 former workers at an RCA plant in Taoyuan have died of liver and lung cancers since the 1990s.

The plant in the northern county of Taoyuan (now Taoyuan City) shut down in 1992, a few years after RCA's takeover by General Electric, an American multinational conglomerate, and its subsequent sale to the French Thomson Consumer Electronics.

RCA had transferred NT$3.2 billion out of Taiwan from July 1996 to January 1997 when the case was brought to trial.

In the span of 25 years, RCA continuously polluted the site with volatile organic compounds (VOCs) which allegedly led to the high incidence of cancer among its former employees. Therefore, the area where the plant was located was subsequently declared a permanent toxic site by the Taiwanese Environmental Protection Agency, and GE and Thomson spent millions of dollars on a cleanup.

A spokesman for the defendant said, however, that a study conducted by the Taiwan government had shown no correlation between the cancer cases and the RCA facilities. The lawyer of the defendant also claimed that the incident took place years ago so the indemnity is overdue.

In the class-action suit that had been running for nearly 15 years, the workers' families were seeking damages of NT$2.7 billion.

Lin Yong Song, the lead lawyer of the victims, pointed out that RCA understood the predicament completely when they shut down the plant in Taoyuan. However, they avoided their responsibility and left the hazards to the civilians. Lin further expressed his gratitude towards the judge for acknowledging the causation in the incident but there is still a huge difference in the compensation between the ruling of the court and the initial appeal of the victims.

In Taiwan, media compares this case to the Hinkley groundwater contamination case of the United States.