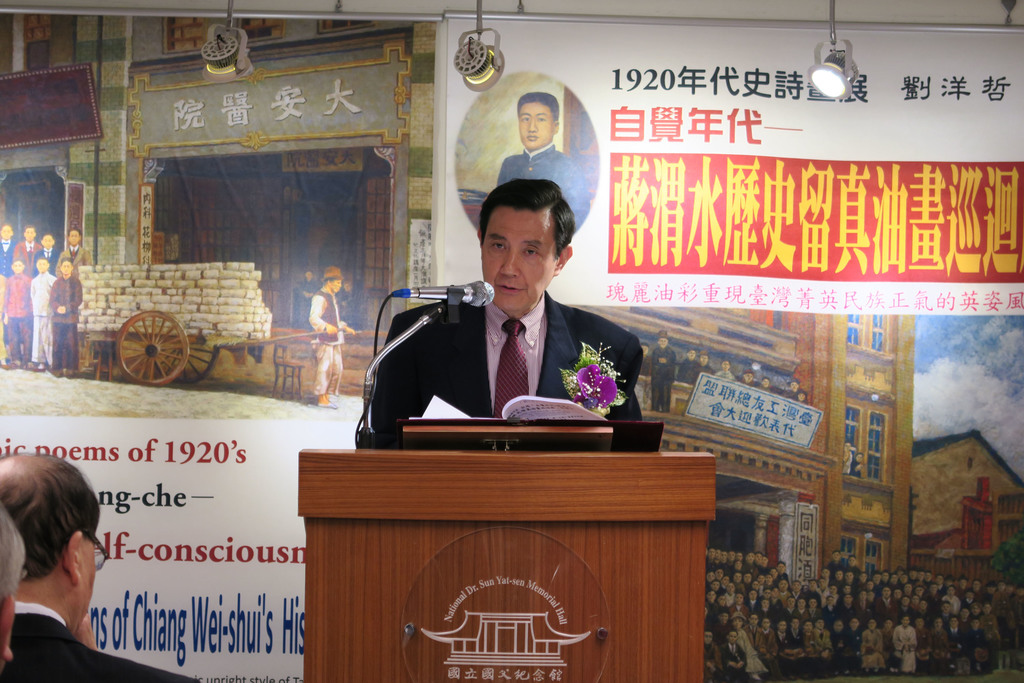 President Ma Ying-jeou visited the “Era of Consciousness: A Traveling Exhibition of Paintings Depicting the Life and History of Chiang Wei-shui” display Sunday at Taipei’s Sun Yat-sen Memorial Hall. Ma delivered an address in which he praised Chiang as a revolutionary pioneer who was a driving force in non-violent resistant to the occupation government of Japan and also led the movement for cultural and educational reform in Taiwan. All of these efforts, said Ma, earned Chiang the well-deserved sobriquet of "Taiwan's Sun Yat-sen."

Citing one example of Chiang’s role in resisting the ravages of Japan’s occupation of the island, Ma noted that not only did Japan fail to pass and enforce laws prohibiting the sale and use of opium, it actually attempted to include opium as one of the money-making items in its tax monopoly. Chiang and his son acted to expose the position of the Japanese government by reporting it to the League of Nations in Switzerland. Chiang went with his son to the Ministry of Communications in the evening and took advantage of a telegraph operator who did not understand English to send a telegram to the League of Nations, a non-violent measure that complicated Japan’s attempt to earn extra revenue from the sale of opium in Taiwan.

Ma also recalled how during his tenure as Mayor of Taipei City he introduced measures to reduce the burning of paper money in funerals and commemorations. He said that he discovered during that campaign that Chiang, who was trained as a medical doctor, advocated in an editorial in the Min-pao newspaper in 1920 that burning paper money and joss was harmful to health and the environment – and all this a full 80 years before Ma’s own campaign. Ma said he marveled when he first heard that bit of news, saying, "My God, he was such a visionary."

President Ma said that while Chiang’s life was cut short at the age of only 41, he offered "two decades of hard work on behalf of equality and freedom for half of the people in the world.” Ma noted that a couplet with the calligraphy of Chiang Wei-shui that reads, “Our fellow citizens must be united, in union lies strength,” hangs in front of his office in the Presidential Building.

Ma also mentioned that he has often supported and participated in various activities commemorating Chiang Wei-shui in Taipei such as the opening of the Chiang Wei-shui Memorial Park in Tataocheng. That ceremony was followed by the issuance of commemorative coins by the Central Bank as an expression of the government’s admiration and appreciation for Chiang’s efforts on behalf of the people.

Ma noted that while Chiang was physically weak due to mistreatment and time in prison at the hands of the Japanese, he was a gifted physician and scholar who never wavered in his dedication to the people of Taiwan. When he died, said Ma, more than 5000 people showed up to pay their respects for his service to the nation.

The Chiang Wei-shui display, which opened Saturday, April 11, will run until Sunday, April 26, in the Tswei-heng Gallery of the Sun Yat-sen Memorial Hall. The Chiang Wei-shui Cultural Foundation commissioned well-known artist Liu Yang-che to produce this series of paintings in 2009. Liu, who was born in 1944, is famous for the magnificent colors in his works and his skill in capturing the character and spirit of his subjects. Please visit the site of the Sun Yat-sen Memorial Hall at www.yatsen.gov.tw.
or call the Information Desk at (02) 2758-8008 ext. 545 or 546 for more information on the exhibition.