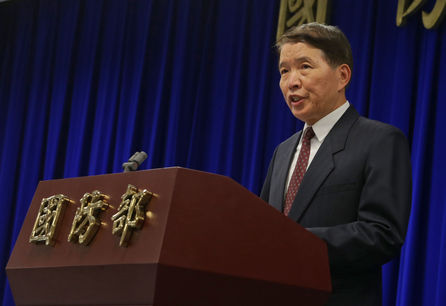 TAIPEI (Taiwan News) – President Ma Ying-jeou turned down an offer of resignation from Defense Minister Kao Kuang-chi but ordered one demerit for Chief-of-Staff Yen Teh-fa and two for Army Commander Chiu Kuo-cheng over the Apache incident, reports said Wednesday.
The crisis began when entertainer Janet Lee posted a picture online of her sitting at the commands of an Apache helicopter at an Army base in Taoyuan, but has since expanded to include about 40 civilian visitors and more than 18 officers in the Army hierarchy.
Kao visited the Presidential Office at the head of a delegation of six top military officers Wednesday afternoon to present his views and the conclusion of a military meeting about the disciplinary problems.
After the president heard the report, he concluded that military discipline had been dealt a severe blow by the behavior of the Army officers and ordered the Ministry of National Defense to conduct a thorough review, reports said.
The military needed to restore its reputation within the shortest possible time, Ma said, adding he would continue to lead the supervision of the armed forces, reports said.
He warned that the current efforts to straighten the situation could not just be short-lived in the wake of bad publicity, and needed to be continuous and constant.
Yen and Chiu were disciplined because of their shortcomings in supervising discipline in the Army, reports said.
After the allegations against Lee, more revelations appeared about other visits to military bases by civilians, with critics drawing comparisons between military bases and amusement parks.
The Taoyuan District Prosecutors Office is investigating the Apache affair and has questioned officers, civilian visitors and foreign caregivers involved in the case.