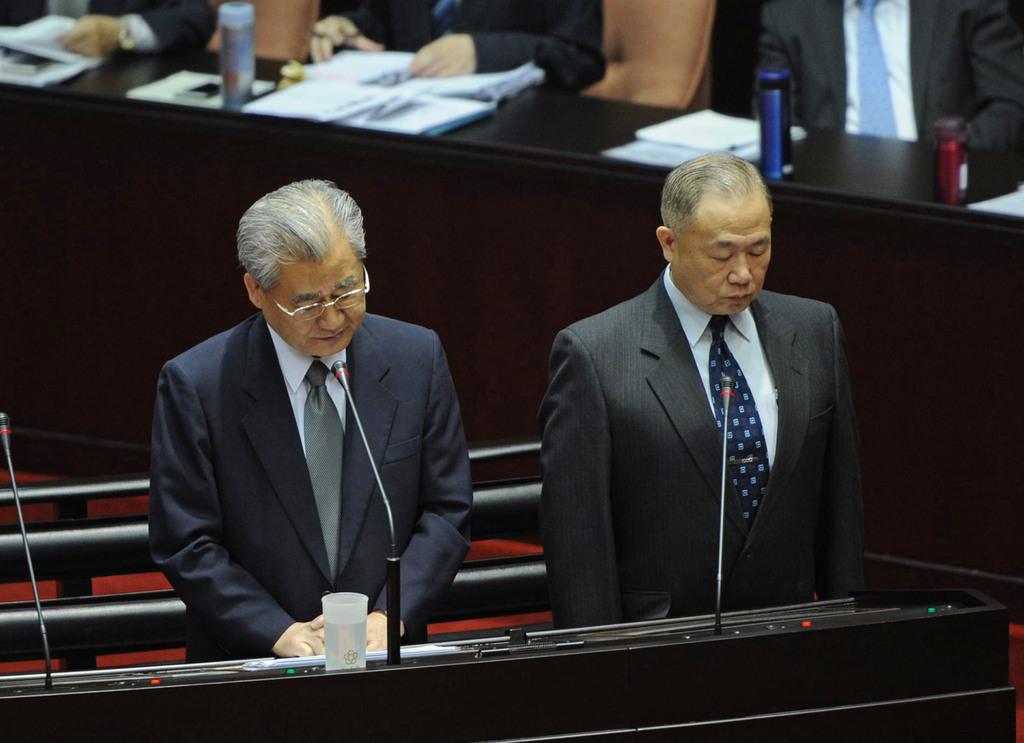 TAIPEI (Taiwan News) – Investigators raided the Longtan Army Base again Tuesday after reports that the top officers of its Apache helicopter squadron invited more groups to visit than just the one including entertainer Janet Lee.
Army Commander General Chiu Kuo-cheng also requested disciplinary action against himself Tuesday as the allegations snowballed to include more than 40 people, while Defense Minister Kao Kuang-chi was planning to visit the Presidential Office Wednesday to deliver a report to President Ma Ying-jeou.
After Lee posted pictures of herself in the cockpit of an Apache AH-64E on Facebook last week, allegations surfaced that Lieutenant Colonel Lao Nai-cheng invited more outsiders to visit the base in Taoyuan City. The revelations culminated in a second round of military sanctions against Lao issued Tuesday and in interrogations of two dozen people by the Taoyuan District Prosecutors Office.
The commander of the 601st Air Cavalry Brigade, Major General Chien Tsung-yuan, reportedly allowed four of his friends to visit the Apache hangar on February 20, while two days later, Lao hosted a party of ten friends, the Ministry of National Defense said. The Lee visit, which included a total of 26 visitors with foreign caregivers and children, took place on March 29.
As a result of the latest revelations, a team of prosecutors and military police visited the Longtan base again around Tuesday noon, reports said. The aim of the visit was to find out the names and backgrounds of the visitors and to look at surveillance camera footage of the groups, reports said.
In the latest developments, Chien and the 14 visitors on the two occasions were listed as defendants and barred from leaving the country, according to media reports. The case also triggered apologies by Premier Mao Chi-kuo and Defense Minister Kao.
Earlier Tuesday, the Army announced the latest round of disciplinary measures against its officers implicated in the incidents. This was the third such round which followed outrage over previous sanctions allegedly being too light.
Lao’s number of major demerits was doubled Tuesday, making him certain to be expelled, although he would hold on to his pension rights, reports said. He had already been relieved of his function at the Apache squadron and referred to prosecutors. He was facing several years in prison if found guilty of an array of national security-related violations. In addition to the visit, he was also being investigated for wearing a NT$2 million (US$64,500) Apache pilot helmet to a Halloween party.
Chien received one major demerit and two demerits, while he was relieved of his position though he did not figure on the expulsion list yet, the military said.
The ministry spokesman said that as the investigation progressed, a fourth round of disciplinary measures could not be excluded.
The visitors with Lee including a dozen people, including children, a Japanese citizen, and several maids from Southeast Asian countries, triggering concern about the secrecy of military hardware on the base. There were two maids or caregivers from Indonesia, one from Vietnam and one from the Philippines, reports said. Investigators reportedly tried to visit them Tuesday but most were not at home, according to media reports.
The Ministry of National Defense said Tuesday that the incident had not been the subject of exchanges of concern from the part of the United States, the supplier of the Apache helicopters.