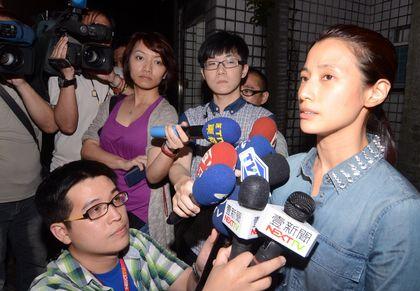 Local TV presenter and socialite Janet Lee expressed her apology over a military security case late Sunday after being questioned and released by Taoyuan district prosecutors. On Sunday, the prosecutors summoned 12 people, including Lao, his wife Chiu Ya-ching, the Lee couple, Chiu's brothers and sister, and the Lao couple's friends who made the March 29 visit, for questioning.

The prosecutors released 11 civilians, including Lee, involved in a military security lapse on an Apache-stationed Army base in Taoyuan, but continued to keep an Apache attack helicopter pilot for further questioning.

Lt. Col. Lao Nai-cheng (勞乃成), the Apache pilot, was exposed to have taken a group of 26 relatives and friends, including Janet Lee and 6 foreigners, to his base in Longtan District of Taoyuan for a tour on March 29.

Without approval from his superiors, Lao gave his visitors access to a hangar in the base that houses AH-64E Apaches, the Army's most advanced chopper, even allowing them to board one of the helicopters and take photos.

The incident came to light after Lee uploaded four pictures of her visit on her Facebook page, which drew public criticisms over the military's loose security control.

Upon being released, Lee said she would like to serve as a volunteer for Taiwan's military.

In its immediate response, the military punished Lao on Friday by giving him a major demerit and removing him from his post as a deputy head of a helicopter squadron under the Army Special Forces Command.

As the media continued to dig into the case, Apple Daily ran a front-page story Saturday with a photo showing Lao in a military flight suit, wearing a helmet for flying Apache helicopters, at a Hallowen party held Oct. 31 last year at his home.

The Army Command Headquarters confirmed the reports in a statement on Saturday and said it has taken the case to the Taoyuan District Prosecutors Office for an investigation into whether Lao's conducts have violated the military's information security rules.

Lao is also suspected of taking an Apache helmet, which is listed as a military secret, out without permission.

To conduct further investigation on the case, the prosecution searched Lao's residence, the 601 Brigade and thirteen other locations yesterday.