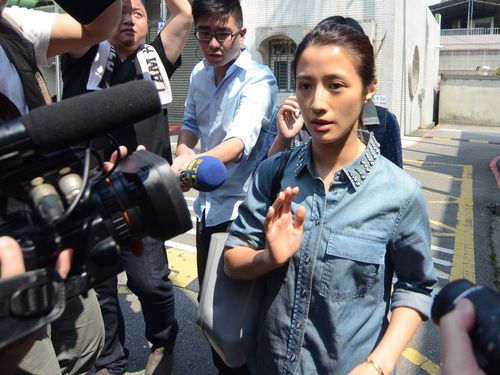 Prosecutors on Sunday summoned 11 people involved in a trip to a helicopter squadron in Taoyuan and searched 15 places and the houses of civilians who were taken to visit an AH-64E Apache attack helicopter in violation of regulations on visitors to military bases.
Among 11 people summoned for questioning over the controversial trip, including Lt. Col. Lao Nai-cheng, former deputy head of a helicopter squadron in Taoyuan under the Army Special Forces Command, and entertainer Janet Lee, one was reported as an unidentified Japanese man.
Lee told the press before she entered the district prosecutors' office that she would detail to the prosecutors all she knows about her visit.
Lao, a pilot with the Army's 601st brigade, is at the center of the controversy in which he took a group of 20 relatives and friends, including Lee and her family, to his base in Longtan District in Taoyuan March 29.
Without the approval of his superiors, Lao gave his visitors access to a hangar on the base that houses the Apaches, the Army's most advanced chopper, even allowing them to board one of the helicopters and take photos.
The incident came to light after Lee posted four photos from her visit on her Facebook page. The military punished Lao Friday by giving him a major demerit and removing him from his post. Four other officers were also disciplined in the same case.