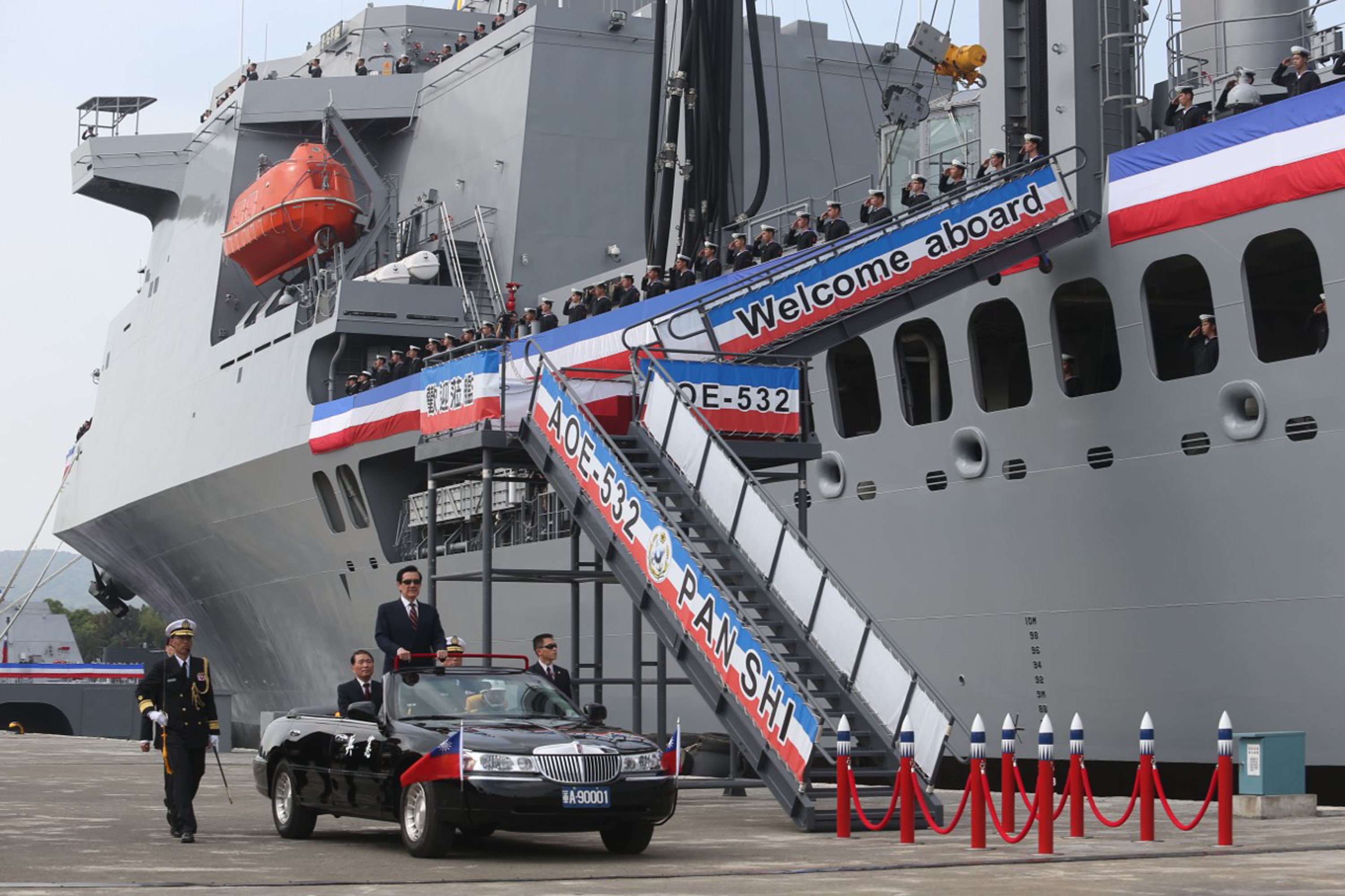 Kaohsiung, March 31 (CNA) President Ma Ying-jeou presided over a ceremony in Kaohsiung on Tuesday at which two military vessels -- Taiwan's first home-grown stealth missile corvette and a new supply ship -- were put into service. Leading a naval ship commissioning ceremony for only the second time since he took office in May 2008, Ma lauded the corvette's mobility and performance and said both ships demonstrated the country's success in improving its shipbuilding capabilities.
The two ships are part of the Navy's efforts to modernize its fleet. The 500-ton twin-hulled Hsun-hai class corvette, the Tuo Jiang, cost about NT$2.1 billion (US$66.39 million) to build and was officially delivered to the Navy by local shipbuilder Lung Teh Shipbuilding Co. at a ceremony held Dec. 23 in Suao in eastern Taiwan. Ma said the new corvette's name is significant because it was taken from a Republic of China (Taiwan) Navy ship that played an important role in the 1958 Artillery Battle between Taiwan and China, which began on Aug. 23 that year and lasted for 44 days. Some of the soldiers who had participated in the battle were present at the ceremony to witness the commissioning of the ships, Ma said. The Tuo Jiang is equipped with several weapons, including the locally developed Hsiung Feng II and Hsiung Feng III anti-ship missiles, a 76 mm gun and Mark 46 torpedoes, the Navy said. It has a range of 2,000 nautical miles, is 60.4 meters long and 14 meters wide, and carries a crew of up to 41. Training on the corvette has already begun. The new supply vessel, the Pan Shi, was delivered to the Navy by local shipbuilder CSBC Corp. in January 2015 at a ceremony in Kaohsiung, and training has since begun on the second supply vessel in the Navy's fleet. The vessel will help extend the Navy's maritime combat capabilities through its support of Taiwanese warships, as well as Taiwan's ability to provide international humanitarian assistance, Ma said. The Pan Shi will be used to transport fuel, ammunition and other supplies to support warships in wartime. In peacetime, it will be mainly used to carry supplies, conduct maritime rescue missions, and provide humanitarian assistance. It was named after a mountain in the eastern county of Hualien, Ma said. The word "pan shi" itself suggests a sturdy and unwavering foundation. The new supply vessel, which cost NT$4.09 billion (US$130 million) to build, measures 196 meters in length and 25.2 meters in width, can take a crew of up to 165 people, and has a range of 8,000 nautical miles, according to the Navy. It can reach a maximum speed of 22 knots and has a load displacement of about 20,000 tons. Following his speech, the president boarded the two vessels for a closer look, accompanied by Defense Minister Kao Kuang-chi, Navy Commander Adm. Li Hsi-ming, and many other government officials. The Tuo Jiang will be based with the 131st Fleet in Keelung on Taiwan's northern coast, while the Pan Shi will form part of the 151st Fleet, which is based in Zuoying in Kaohsiung, southern Taiwan. (By Elaine Hou)