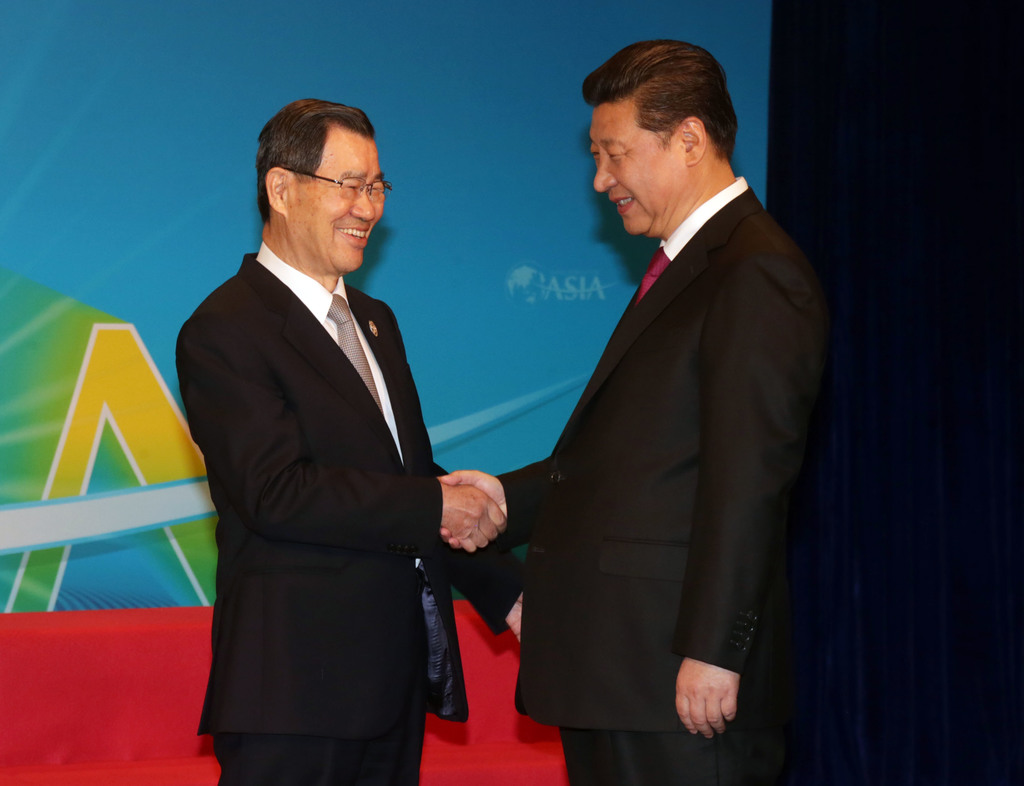 TAIPEI (Taiwan News) – Former Vice President Vincent Siew told Chinese leader Xi Jinping at the Boao Forum for Asia Saturday that Taiwan was ready to join the Asian Infrastructure Investment Bank.
Siew is the head of the Taiwanese delegation at the annual international event on the Chinese island province of Hainan. Both he and President Xi posed for pictures with the entire group and with China’s Taiwan Affairs Office Minister Zhang Zhijun before starting talks.
Several countries, including Great Britain and Russia, have expressed strong interest in joining AIIB despite apparent reluctance voiced by the United States. Zhang said that China wanted to learn more details about Taiwan’s plans for membership of the bank. The Chinese officials said there was a chance that Taiwan could join but its official request had not been received yet.
A news release from Siew’s group said that Taiwan’s consistent policy was to take part in regional economic integration in order to express the country’s views and to give its businesses more opportunities to develop international markets.
According to the statement, participation in the AIIB would help expand Taiwan’s international economic involvement and even deepen cooperation between the manufacturing sectors of Taiwan and China. The document also mentioned the Regional Comprehensive Economic Partnership and the Trans Pacific Partnership as positive examples of regional integration.
Before his meeting with Xi, Siew was quoted by the media as saying the AIIB would work better if it had more member economies with experience in economic development, a clear reference to Taiwan.
Earlier, President Ma Ying-jeou also said the country should not stand by while other countries in the region join the AIIB, a Chinese initiative which critics see as a potential challenger to Western-led economic bodies such as the International Monetary Fund or the Asian Development Bank.
The meeting between Siew and Xi reportedly only lasted five minutes and took place just before the Chinese leader delivered the opening speech of the Boao Forum. At the 2013 edition of the event, Siew spent 50 minutes with Xi and last year he had a 45-minute talk with Premier Li Keqiang, the Chinese-language Apple Daily noted. At the Asia Pacific Economic Cooperation summit in Beijing last November, Siew also spoke with Xi for at least half an hour.