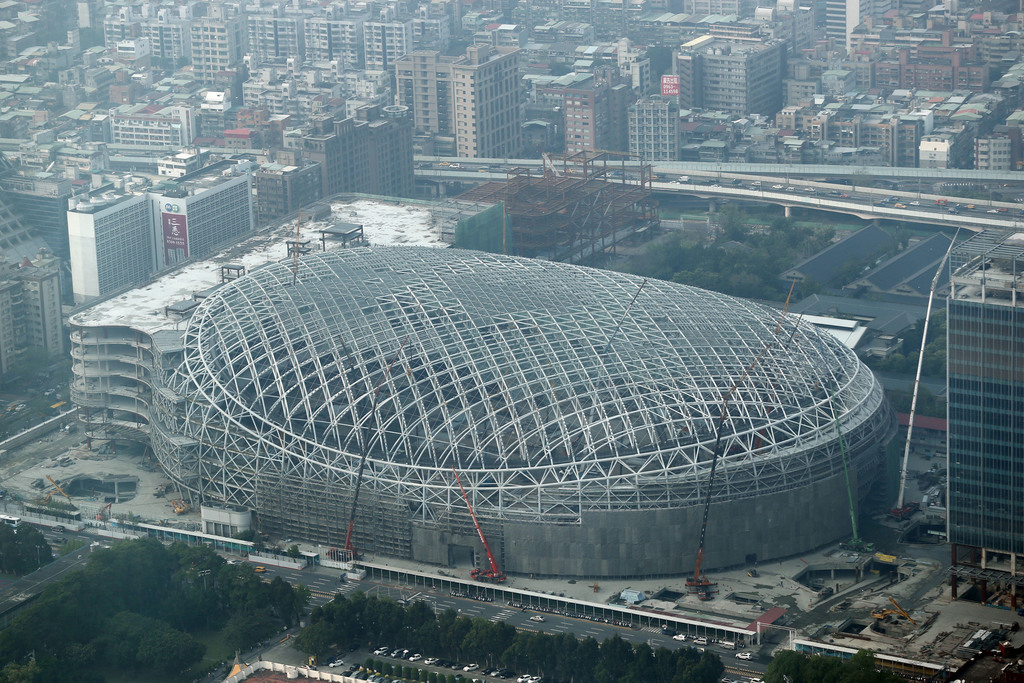 TAIPEI (Taiwan News) – After a chimney at the nearby Songshan Tobacco Factory was found close to collapse, the Taipei City Government nevertheless decided against halting work on the Taipei Dome sports stadium Friday but fined developer Farglory Group NT$1.5 million (US$47,900).
The controversial stadium project has been embroiled in a number of disputes over trees to be removed, traffic congestion and budgets. Conflicts between Farglory and the Taipei City Government intensified after independent Ko Wen-je took office as mayor last December.
The 40,000-seat stadium is almost completed but stands next to the protected old factory, which includes a chimney now close to collapse, according to reports.
A temporary halt to work on the Taipei Dome might be called later in the day if the problem of the chimney’s safety could not be solved immediately, Ko told reporters Friday. Earlier in the morning, a report by the city’s environmental department said that the structure was close to the warning level for collapse.
A complete safety review was expected to be presented on April 15, reports said.
During the afternoon, representatives of the city and Farglory sat together to work out a solution for the chimney. After the meeting, the city announced that for technical reasons it would be impossible to have work on the stadium stop immediately, so instead the fine was levied according to the provisions of the Environmental Assessment Act.
Even though Farglory had assured the meeting that it had completed reinforcements on the chimney, data from the surroundings showed that there still were problems and that the developer should hurry up with improvements, a city spokesman said.
The Taipei Dome has been listed by the city government as one of the projects to be investigated for irregularities and eventual corruption, while Ko also wanted to renegotiate the contract which was said to be too favorable to Farglory, especially in the case of delays, which have already occurred.
Earlier in the week, allegations erupted that a Ko campaign adviser had accepted money from Farglory in order for the permission to remove the trees on the road near the stadium, which have been protected by environmentalists.
A member of the Taipei City Council said he had handed over information about the allegations to Ko personally but no official confirmation of an investigation had been made, reports said. The aide accused of having accepted the money left the Ko campaign last May, six months before he was elected mayor.
In a newspaper interview, President Ma Ying-jeou defended the Taipei Dome project, saying the residents of the capital had been hoping for its completion for 20 years. Commenting on the allegations of dubious practices surrounding projects like the stadium, Ma, who served as mayor of Taipei from 1998 to 2006, said he did not understand all the details of the projects.