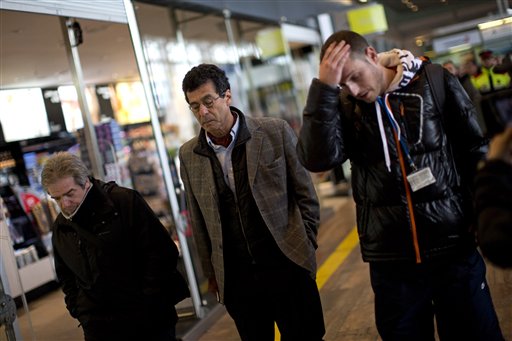 PARIS (AP) — A passenger jet carrying 150 people crashed Tuesday in the French Alps as it flew from Barcelona to Duesseldorf, authorities said. As search-and-rescue teams struggled to get to the remote, snow-covered region, France's president warned that no survivors were expected.

The crash site was at Meolans-Revels, near the popular ski resort of Pra Loup, according to Eric Ciotti, the head of the regional council in southeast France. The site is 700 kilometers (430 miles) south-southeast of Paris. But with mountains all around and few clear trails into the area, access to the crash site was expected to take time.

The Germanwings Airbus A320 plane left Barcelona at 9:55 a.m., sent out a distress signal at 10:45 a.m., then crashed in a mountainous zone in France at an altitude of about 2,000 meters (6,550 feet), said Pierre-Henry Brandet, the French Interior Ministry spokesman.

Brandet told BFM television he expected "an extremely long and extremely difficult" search-and-rescue operation because of the area's remoteness.

Germanwings official Oliver Wagner told German television that Germanwings flight 9525 carried 144 passengers and 6 crew members. He did not give a breakdown of nationalities on board.

Germanwings is a lower-cost unit of Lufthansa, Germany's biggest airline. It has been operating since 2002, part of traditional national carriers' response from rising European budget carriers. It serves mainly European destinations. I

The Germanwings logo, normally maroon and yellow, was blacked out on its Twitter feed.

Family members arriving at Duesseldorf airport were taken from the main terminal to a nearby building, which airport employees partially covered with sheets for privacy. At Barcelona airport, police escorted several crying women to a part of the airport away from the media. One woman held a jacket over the head of another woman, who was sobbing.

The owner of a campground near the crash site, Pierre Polizzi, said he heard the plane making curious noises shortly before it crashed.

"At 11.30, I heard a series of loud noises in the air. There are often fighter jets flying over, so I thought it sounded just like that. I looked outside, but I couldn't see any fighter planes," he told The Associated Press in a phone interview. "The noise I heard was long — like 8 seconds — as if the plane was going more slowly than a military plane. There was another long noise after about 30 seconds."

Polizzi said the plane crashed about 5-to-8 kilometers (3-to-11 miles) from his place, which is closed for the season.

"It's going to be very difficult to get there. The mountain is snowy and very hostile," he said.

The municipal sports hall of Seyne-les-Alpes, 10 kilometers (6 miles) from the Val d'Allos ski resort, was being set up to take bodies or survivors from the crash, according to Sandrine Julien of the town hall.

There was no obvious weather reason Tuesday why the plane went down. Capt. Benoit Zeisser of the nearby Digne-le-Bains police said there were some clouds but the cloud ceiling was not low.

In addition, the safest part of a flight is when the plane is at cruising elevation. Just 10 percent of fatal accidents occur at that point, according to a safety analysis by Boeing. In contrast, takeoff and the initial climb accounts for 14 percent of crashes and final approach and landing accounts for 47 percent.

In a live briefing Tuesday, Hollande said it was likely that a number of the victims were German.

The last time a passenger jet crashed in France was the 2000 Concorde accident, which left 113 dead — 109 in the plane and four on the ground.

German Chancellor Angela Merkel spoke with both Hollande and Spanish Prime Minister Mariano Rajoy about the crash, immediately cancelling all other appointments.

At a briefing in Berlin, Merkel told reporters she would travel to the crash site region on Wednesday, and that Germany's foreign and transport ministers were already en route. She said her thoughts were "with those people who so suddenly lost their lives, among them many compatriots."

"The crash of the German plane with more than 140 people on board is a shock that plunges us in Germany, the French and the Spanish into deep sorrow," Merkel said.

She reminded everyone that the cause was not known.

"We still don't know much beyond the bare information on the flight, and there should be no speculation on the cause of the crash," she said. "All that will be investigated thoroughly."

The A320 plane is a workhorse of modern aviation. Similar to the Boeing 737, the single-aisle, twin-engine jet is used to connect cities between one and five hours apart. Worldwide, 3,606 A320s are in operation, according to Airbus.

The A320 is certified to fly up to 39,000 feet but it can begin to experience problems as low as 37,000 feet, depending on temperature and weight, including fuel, cargo and passengers.

The A320 family also has a good safety record, with just 0.14 fatal accidents per million takeoffs, according to a Boeing safety analysis.

The German Federal Bureau of Aircraft Accident Investigation was sending three people to France to join the investigation. French Interior Minister Bernard Cazeneuve, the country's top security official, and the German ambassador in Paris were among those heading to the crash site.

In Madrid, Rajoy suspended his agenda to preside over an emergency government meeting about the crash.

"Like everyone, I lament this incredibly sad and dramatic accident," Rajoy said.

Antonio San Jose, spokesman for the Spanish airport authority AENA, said his agency was working with Germanwings to reach out to relatives of the victims.

Spain's king and queen, in Paris on Tuesday, canceled their previously planned state visit and offered their condolences to all who lost a loved one in the crash.