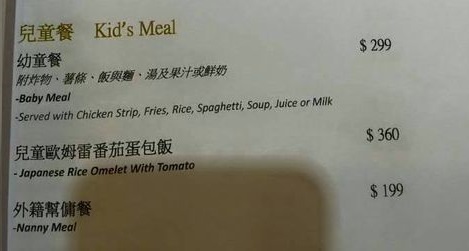 Taipei, March 23 (CNA) Diamond Cafe, a newly opened restaurant in high-rent eastern Taipei catering specifically to families with children, sparked controversy on Monday with a picture of its "Nanny Meal" that it was later forced to withdraw.
The Nanny Meal, offered for NT$199, was targeted at foreign caregivers accompanying families for a meal at the upscale restaurant, made clear by the meal's literal Chinese name -- "Foreign Helper Meal."
Posted by the restaurant on its Facebook page, the picture sparked the ire of Taiwan's Internet community, which accused the restaurant of discriminating against foreign migrant workers.
They were also upset that the meal for caregivers cost less than a "Children's Meal" priced at NT$299.
"Is this the sort of value we wish to impart to our children," questioned one Internet user, while others advised the restaurant to change the name of the "Nanny Meal" to something more appropriate.
Some netizens said households that hire domestic helpers should regard foreign workers as members of their family.
Others told CNA that well-off families who can afford domestic help should provide decent meals to their foreign caregivers when dining out with the caregivers' assistance.
In response to the criticism, the restaurant issued an apology later Monday for the inappropriate name, and explained that the special meal, which does not contain pork or lard, was designed to accommodate the requirements of Muslim migrant workers.
The restaurant said it would redesign its menu and remove the controversial item. (By Lin Chang-shun and Ted Chen)