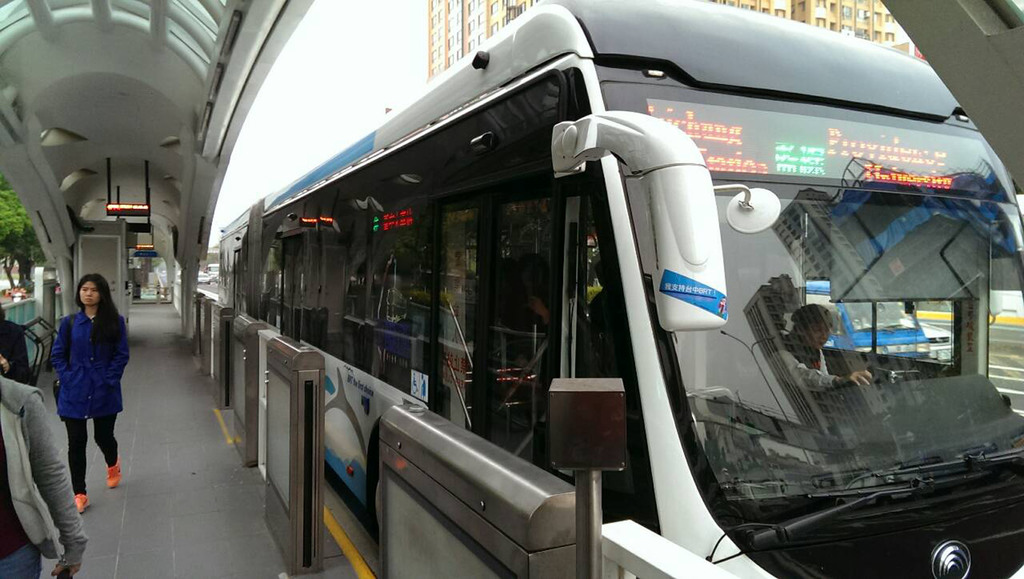 Taichung Mayor Lin Chia-lung shied away from calling the city’s Bus Rapid Transit (BRT) system a true BRT, saying that Taichung’s BRT “has not been born yet.” Lin noted that a team he put in place shortly after taking office is working to ferret out problems in the system and he will offer a comprehensive plan to the public within the next few months.

Speaking at a town hall meeting on Monday, Mayor Lin said he had assembled a group of 17 experts in transportation from all over Taiwan to study the BRT system as it is now operating and to see what changes and adjustments need to be made. The team has met more than 20 times already to discuss what has been learned and to make on-site inspections throughout the entire BRT system.

Lin outlined four major areas where work is needed. He said that the first priority is to ensure that passengers using the system will get better service, no matter whether this involves using single-car units or double-car arrangements. Second, the system needs to have more dedicated lanes in order to achieve greater efficiency and raise average speeds throughout the system. Third, the system must be absolutely safe both for those riding on buses and for other vehicles traveling around the city. And fourth, the system eventually should be extended to offer service to locations in other parts of the Greater Taichung area.

Lin said the BRT work team is developing a new layout for the bus system that will be unveiled by July 8. This will include more dedicated lanes for BRT buses in order to minimize the need to switch from dedicated lanes to regular traffic lanes. This will reduce the possibility of accidents and help lower travel times in the system.

At the same time, the hardware and software in the BRT control center will be upgraded so that dispatchers can carry on three-way communication when needed with buses in the system.

The Taichung BRT has been criticized for a number of incidents since it began operation late last year. On January 20 a bus which had just left Taichung Station was hit by an SUV driven by a driver who was unfamiliar with traffic in Taichung. The SUV impacted the side of the bus near the driver’s seat but fortunately the bus driver, a woman surnamed Wang, was able to control the vehicle and pulled on the handbrake before fainting to avoid further damage.

Ironically enough, Wang was embarrassed less than a month later when a passenger took photos of her chatting with a volunteer assistant while driving, even allowing the volunteer to call out bus stops and make announcements using the PA system. BRT officials found themselves having to upbraid the driver and issue reminders to drivers and assistants on the importance of safety.

In late February Taichung City Councilor Chen Shu-hua charged that of the 32 buses in use in the BRT system at the time, an average of 19 vehicles a day were in need of some kind of repair or maintenance. She said that the system was not operating in accordance with the standards set for safety, noting that buses were often sent out into traffic without having been first inspected and declared free of problems.

Also in late February, the system received bad publicity after a pair of young sisters were separated while riding the systems. The older sister had stepped down from the bus at a stop, but the driver did not check the interior closely enough and closed the doors and pulled away before the younger sister could alight. The older sister ran nearly two kilometers to the end of the line at Taichung Train Station to pick up her sister, who was still on the bus. Afterwards the Taichung Municipal Department of Transportation and the driver were forced to offer public apologies to the two sisters.

In March there were also minor problems with the system including a bus which stalled and could not be re-started and eventually needed a new battery in order to continue operating. That was followed a few days later by a collision between a bus and a private vehicle as the bus was changing from a dedicated lane to a regular lane. There were no injuries in that particular incident, but it pointed up the risk of accidents in places where buses must switch between the two types of lanes.