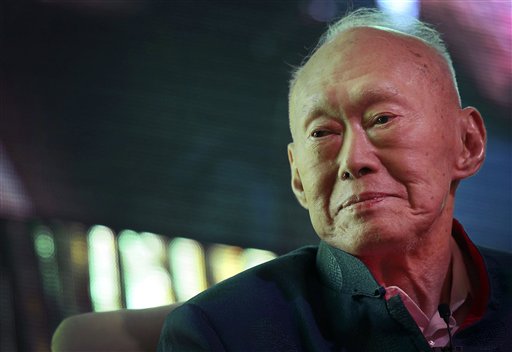 In the statement, the Prime Minister announced the passing of Lee Kuan Yew, who passed away at the age of 91 Monday morning.

Arrangements for the public to pay respects and for the funeral proceedings will be announced later, according to the statement.

Lee had been in hospital for severe pneumonia since February 5 but worsened due to an infection on March 17.

Lee's close ties with Taiwan were marked by his frequent visits. He visited Taiwan more than 25 times, according to Taiwan's state media the Central News Agency (CNA).

In 1993, a historic meeting between Koo Chen-fu, then chairman of the Straits Exchange Foundation (SEF) of Taiwan, and Wang Daohan, president of China's Association for Relations Across the Taiwan Straits (ARATS), took place in Singapore.

The meeting marked a breakthrough in cross-strait relations by institutionalizing officially-sanctioned talks between the top negotiators from the two sides.

Lee had later clarified that Singapore's role in the meeting would be limited to that of a host, and that the city-state would not participate or serve as mediator in the talks in anyway, showing Lee's practical streak, high political acumen, and the deep ties he shares with Taiwan.

After President Ma Ying-jeou took office in 2008, Lee had praised Ma's policy of “no unification, no independence and no use of force” for several times, saying it benefitted both sides and was supported by other countries in the region.