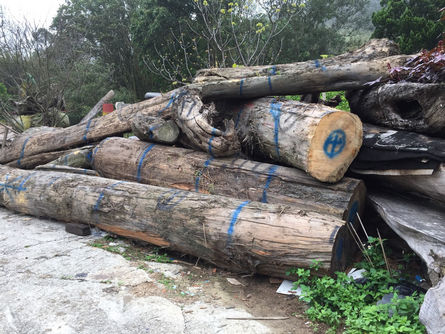 A Taipei city councilor has stepped into the ‘driftwood’ case in a budding controversy involving a batch of timber that forestry officials and others are saying fell naturally in the woods, was carried downhill by wind and water, and was then picked up and hauled away to Sanyi in Miaoli, the center of the wood-carving industry in Taiwan. Under local laws regarding driftwood, such ‘found’ materials can be legally transported and processed.

Taipei City Councilor Kao Chia-yu posted a message on Facebook Sunday morning, however, stating that she has significant doubts about the stories being given out concerning the wood. She points out discrepancies in the type of wood as reported by forestry officials and that seen by police investigating the incident, as well as the fact that the reported number of pieces of wood in question literally do not add up.

Kao wrote that the first thing that stands out is that forestry officials said the wood that was picked up in Neihu was juniper, while the logs seen in Sanyi are fir. The Forestry Service’s records for March 12 and 13 showed commercially valuable timber including red cypress, cypress, cedar and other types of wood. The logs were transported overnight to Sanyi for processing, but records there indicate that the shipment consisted of less expensive grades of fir, drawing into question whether some kind of a switch had been made.

A second point in question is the number of pieces of wood that were involved. Kao said the Forest Service reported that one truck hds three red cypress logs, and a second truck had three fir logs and four broadleaf trees. The Neihu Branch Police report, on the other hand, said 20 pieces of wood had been picked up.

The time of the shipments also shows discrepancies, with some reports indicating that the wood was sent out March 12 and arrived in Miaoli at 7:00AM March 13, while Miaoli police officers said it arrived there in the afternoon of March 13.

Kao said there are also problems with the paperwork concerning the shipment, questions over the Forestry Service’s actions in releasing the timber and the backgrounds of people involved in the shipment

Kao said that ever since Taipei Mayor Ko Wen-je threatened to sack and replace Neihu police chief Chang Meng-lin for negligence in reporting the shipment, she has been the target of criticism and innuendo from the police, so-called ‘mountain rats’ and people in the timber industry. Ko later back-pedaled on his statements and said he would wait and see police reports on the incident before making a decision on the matter.

Kao added that she plans to contact the Shilin District Prosecutors Office Monday and give them the information she has on the case. She said she hopes that investigators will be able to discover the truth behind the different versions of the timber case that are being offered by people involved in the incident.