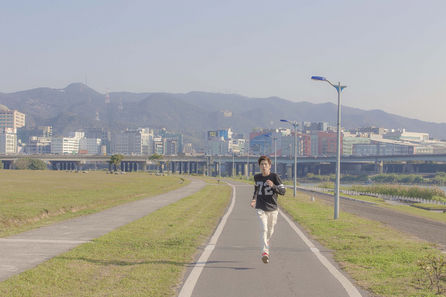 With spring well on its way and temperatures rising, more people are beginning to venture outdoors for recreation and exercise. One part of this change is the craze for participating in marathons, mostly in the form of half-marathon or even "fun walks” but often as full-blown marathons of 40km or more.

At the same time Taiwan has also been experiencing a bout of extremely poor air quality due to atmospheric conditions and pollution from the usual suspects – factories and power plants, vehicular traffic, and even flowering trees and plants.

Health officials are urging those who want to get more exercise outdoors to take precautions to ensure that they are not causing damage to their systems while trying to stay healthy and active. They urge participants in running events to study the calendar to find out which activities are being held when the air quality is likely to be poor and set standards for participating in or passing up an event accordingly. One way is to watch weather reports, which generally include information on air quality and will advise people to minimize outdoor activity when levels of PM2.5 pollution are too high

A substitute gym teacher in Yilan County came under fire from parents earlier this week when he ordered a class of 6th-graders to run 10 laps (about 1750 meters) around the school track, leading four students to report to the school health center after experiencing dizziness. One student even felt bad enough to seek medical treatment after returning home.

The teacher claimed that he was not punishing the students, but rather trying to get them in shape for a physical fitness test next week. He originally called for the class to warm with four laps to go, but found that a few were "slacking off" and asked the class of more than 20 students to do 10 laps, saying that if they could not run that far, they could walk it.

Fu Yu-chen, president of the Puli Runners Club, advises runners that "Whether the air is good or not can be the difference between a good running experience and a bad on!" He notes that when the air is poor, it is easier for the mouth and lungs to feel dry. He says he always tries to avoid inhaling too much dirty air in marathon racing by carefully choosing the events he enters. He recommends concentrating on activities in places such as mountain areas or suburbs where the air quality is better. He also recommends prudence during times when air pollution is more serious such as winter and spring.

Cheng Tsun-jen, a professor at National Taiwan University’s Institute of Occupational Medicine and Industrial Hygiene, cautions that "the main purpose is running marathons is to stay healthy, but inhaling dirty air can have just the opposite effect." Cheng says that health-related organizations should gather relevant information and set standards for when people should run in long-distance events and when they should minimize their exposure to poor-quality air.

Lee Tsung-teh, a professor of environmental engineering at Central University, admits that expecting race organizers to disparage participants because of air quality may be a bit much to ask. He says that it will be easier to take precautions during the planning and organizing stage such as holding events away from areas like busy traffic areas and avoiding times when air pollution is likely to be serious.

For many health activists and marathon buffs the main concern is airborne PM2.5 particles, which are roughly 1/30 the diameter of a human hair. PM2.5 particles are not filtered out by the mucosa and ciliary bodies that protect the body against outside elements. During strenuous activity outdoors, these particles are inhaled into the lungs, where they can become absorbed by the alveoli and can cause asthma and chronic bronchitis with long exposure.

Even more serious harm can come from toxic substances and heavy metals attached to the PM2.5s, which may be absorbed into the blood and affect other organs in the body.

The public can act to protect themselves in several ways. One is to pay attention to air quality information, either through media reports or sources like the Environmental Messenger app, which can provide real-time information on the environment wherever you may be. Or check pages like the Air Pollution Index for information on many local areas in Taiwan.

Secondly, minimize your exposure to bad air by limiting your time outdoors and out and wearing a surgical mask at times and in places where the air is not good.

Third, if you like to ride bikes, stay away from high-traffic areas. Avoid places where you may be held up by traffic lights behind a row of cars spewing exhaust fumes.

And finally, pay better attention to your personal cleanliness. When you come in from outside, wash your hands and face, especially the nasal cavity, and try not to open too many windows while you are indoors.

So no one is saying that you should give up those half-marathons and fun walks. Just be sensible about it, choose your events carefully and be prepared when air quality is poor.