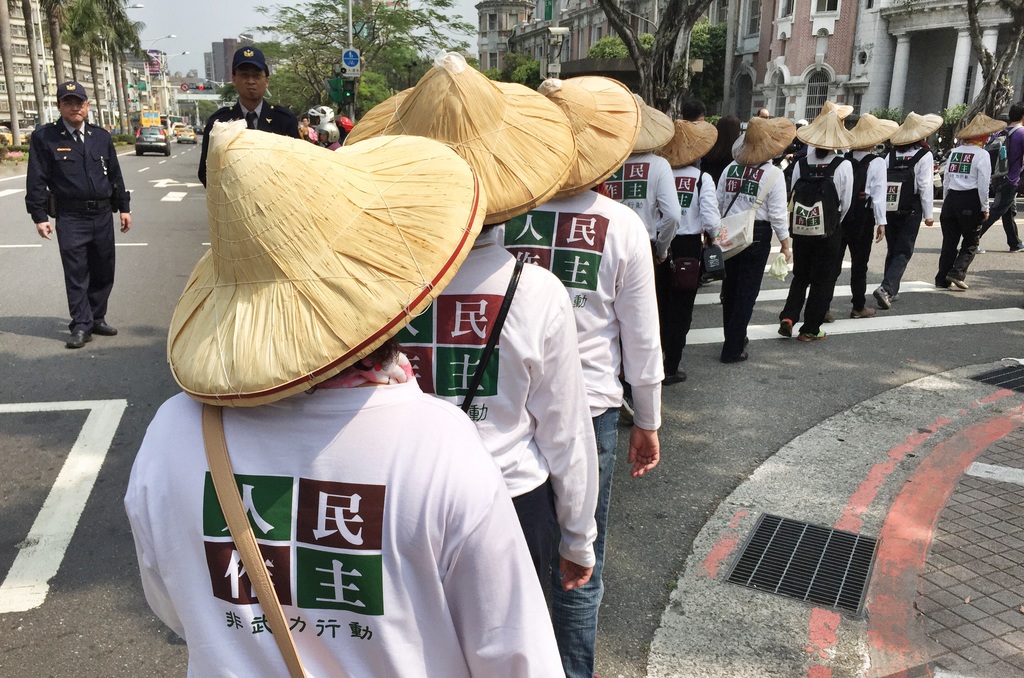 Taipei, March 18 (CNA) Civic groups marched outside the Legislative Yuan in Taipei Wednesday on the first anniversary of the beginning of the Sunflower Student Movement, calling for revisions to the country's referendum and election and recall acts to "give power back to the people."
The group of around 370 people, wearing traditional Taiwanese bamboo farmer's hats, marched silently around the outer perimeter of the Legislative Yuan for 90 minutes, circling the premises seven times.
"We are initiating a movement to give the power back to the people. We ask that the Legislature respond to the people's demands and pass amendments to the Referendum Act and Civil Servants Election and Recall Act during the current legislative term," Grace Lin, a National Chengchi University student, read from a joint declaration before the march.
The groups said they are calling for the lowering of the threshold for proposing and passing referendums and recall motions, and the establishment of an electronic system so that proposals and petitions can be done online. They also expressed hope that the scope of what a national referendum can cover will be expanded to include agreements signed with other countries, according to the declaration.
Taiwan's current referendum act requires the participation of more than half of the country's eligible voters for a referendum to be valid, which is unreasonable and not the case in most democratic countries, Lin Yi-hsiung, founder of the People Rule Foundation and a former chairman of the opposition Democratic Progressive Party, told reporters.
Furthermore, he said, the required number of sponsors for a referendum petition should be reduced from 5 percent to 1.5 percent of the number of eligible voters.
No major issues have been settled by referendum since the act went into effect over a decade ago, which is a great loss for society, Lin said, urging lawmakers to pass amendments to the act during this legislative term. Two of the leaders of the Sunflower Movement, Chen Wei-ting and Huang Kuo-chang, were among the participants who included members from The People Rule Foundation, Taiwan March, Citizen 1985 and Appendectomy Project.
On March 18 last year, the protesters -- mostly college students -- stormed the Legislature in protest over a trade-in-services agreement with China. They occupied its main hall until April 10, leaving only after Legislative Speaker Wang Jin-pyng promised that the agreement would not be reviewed before the passage of a draft oversight act for cross-strait agreements. The Legislature has yet to make any progress on the oversight act.
Since the movement last year, the student activists have joined forces with other civic groups and have expanded their demands to include revisions to the referendum and recall acts, which they believe will increase the people's power to supervise lawmakers and government officials and make decisions on the country's major issues. (By Christie Chen)