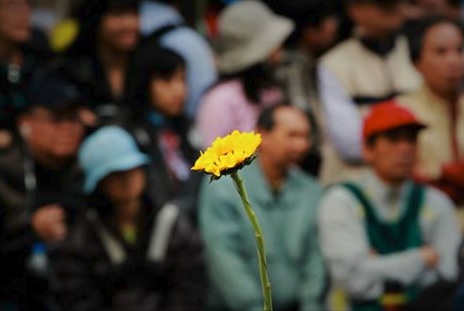 TAIPEI (Taiwan News) – As student activists returned to the Legislative Yuan Wednesday to mark the first anniversary of the start of their occupation, Taipei City Mayor Ko Wen-je described their Sunflower Movement as an unfinished revolution.
The students controlled the main compound and assembly hall of the Legislature from March 18 to April 10 last year in a protest against the ruling Kuomintang’s failure to heed a promise for a thorough review of the trade-in-services pact with China.
“The revolution has not succeeded yet, so the comrades still need to make an effort,” Ko wrote on his Facebook page. The spirit of the Sunflower Movement was to become active and to come out and plant the seeds, he added.
Young people felt they needed to take a stand and save the country themselves after the government took measure after measure which made the public angry, Ko said. He named the fourth nuclear plant, the monopolization of the media, the demolition of private homes to make way for an industrial project in Miaoli County and the death of conscript Hung Chung-chiu as examples of government blunders causing public fury.
He expressed the hope that the government could take a more lenient attitude toward the student movement and show understanding and tolerance, rather than persecuting the participants with legal cases.
The mayor also promised the city would find a cultural and artistic way to commemorate the movement and its achievements.
Concern by young people for politics and for social issues at large had also contributed to the outcome of the local elections last November, Ko said. The KMT was left with control over only six out of 22 cities and counties, while the opposition Democratic Progressive Party won 13 areas. Ko himself was backed by the DPP, but he won as an independent, with his victory largely regarded as the result of the emergence of independent social movements.