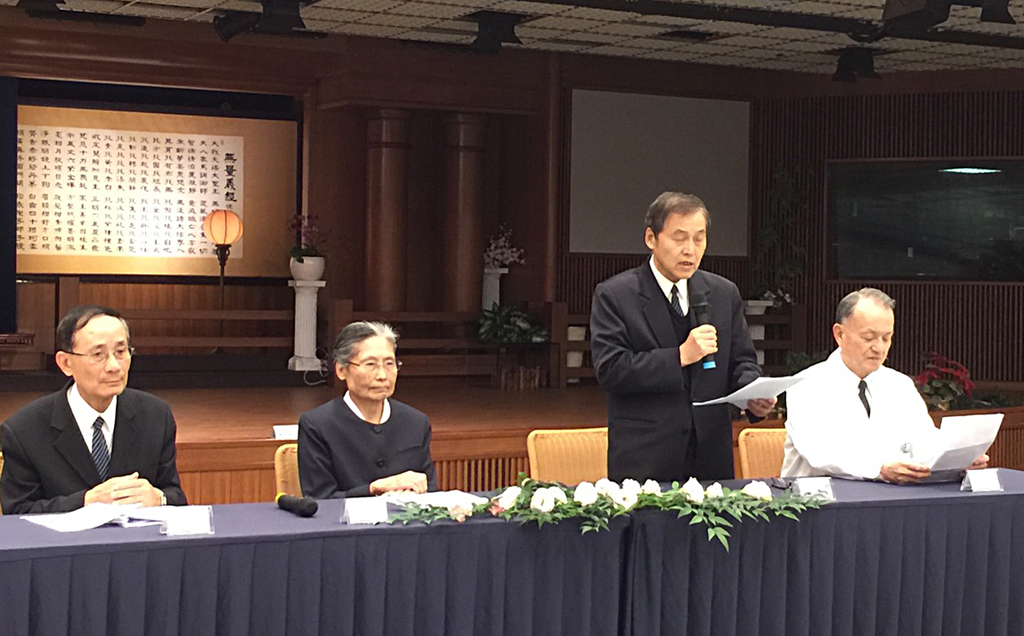 Beset with criticism over its proposal to use a tract of land adjacent to a lake in Taipei’s Neihu District, the Buddhist charity organization Tzu Chi Foundation has announced that it is dropping the plan and will study how to make better use of the property.

In a Monday afternoon press conference at the foundation headquarters in Hualien, several officials appeared to explain the organization’s views on the case and offer apologies to the public for any misunderstandings regarding the Neihu tract and Tzu Chi’s proposals for the area.

Wang Tuan-cheng, Deputy Executive Director of the foundation, told reporters that the organization is taking steps to expand the size and functions of its Supervisory Board in the future. Wang also extended an invitation to the community – which it regards as all of the people of Taiwan – to have trust in Tzu Chi and participate in its activities, including charitable and environmental functions, under the guidance of the Supervisory Board.

Wang noted that Tzu Chi is well aware that its proposed development project was located in a sensitive and protected area, and apologized for the controversy that the announcement of the proposed project generated. She said Tzu Chi has withdrawn its proposal, and related jobs such as an environmental impact assessment and consultations with the city government regarding urban planning will also be cancelled.

Tzu Chi had attempted to stem criticism of its plan by pledging that it would be submitted for formal approval by the Taipei City Government and assuring that it would be implemented in compliance with requirements for environmental protection. Tzu Chi officials said the organization was willing to cooperate with the city in any development in the area to ensure that it meets the needs of the public and the city. They also promised to continue in-depth communication with Neihu residents and those who care about the community in order to build a consensus on any work done on the property.

Wang pointed out that the land had already been partially developed before Tzu Chi purchased it, including asphalt paving and metal fabricated buildings. She said the foundation’s plans for the property had been made with careful attention to green development, including a detention ponds to ensure local water conservation, proper landscaping, and examination of ways the site could be used to provide educational opportunities regarding environmental protection.

Wang added that one key consideration in Tzu Chi’s purchase of the land was that northern Taiwan is often stuck with flooding from heavy typhoon rains, particularly in places like Keelung and Hsichih. Tzu Chi had hoped to use the Neihu site to develop a distribution center that would be close to potential disaster areas in order to provide support in emergency and relief situations. She explained that Tzu Chi’s previous experience has shown that such a base can indeed play a significant role in its relief efforts.

Wang noted, however, that public reaction to Tzu Chi’s announcement of the Neihu project has given the organization pause, and it humbly accepts the will of the people and has turned to deep and sincere reflection to find places where changes may be needed. She expressed hope on behalf of Tzu Chi that the community will continue to offer ideas for improvement to make its programs and actions more responsive to the needs of the people. She stressed that Tzu Chi has a history of nearly five decades, and like any institutional organization sometimes changes need to be made.

Tzu Chi has also been criticized for a lack of transparency in its financial operations. Deputy Chief Executive Biyu Lin said that Tzu Chi apologizes for any inconvenience caused to donors. She announced that beginning March 20, donors will be able to check how their personal donations are handled by visiting the Tzu Chi Foundation website. She explained that the website will indicate in which of four general purposes donations will be used.