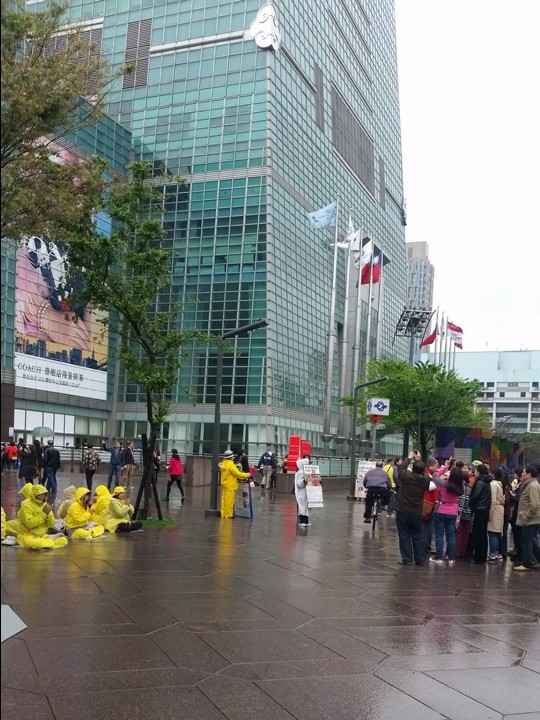 The ongoing tension between supporters of Falun Gong and the Concentric Patriotism Association of the Republic of China (CPA) on the plaza between Taipei 101 and Xinyi Road has subsided recently thanks to a strong police presence by officers from the Xinyi Precinct station. On Saturday, however, a new player appeared to stir up animosity anew.

Members of the Taiwan independence Revolutionary Army (TIRA) showed up with an oversize flag on a 6-meter-long flagpole that was whipped about in gusts of wind, injuring several people nearby. One of the injured told police he wished to file charges against the flag-bearer, and one TIRA member was taken into custody on charges of assault.

Xinyi Precinct commander Wu Ching-tien has ordered stepped-up patrols in the area to avoid confrontations, and lately the CPA has appeared only sporadically, leaving the field to the Falun Gong supporters. The scene has largely been serene, marked only by the meditations of the Falun Gong group, but Saturday at 17:00pm the peace was broken as members of the TIRA stormed onto the plaza in what they called a "guerrilla action."

About 20 members of a TIRA “banner team” arrived at Taipei 101 on a converted motorized tri-wheeled vehicle, only to be confronted immediately by police for traveling in the fast lane of Xinyi Road and slowing traffic. The TIRA members complained they were being deliberately targeted by the police and began arguing about human rights violations. A scuffle ensued in which several people were hit by the flagpole, and two members of TIRA were taken into custody by police on charges of insulting a police officer.

Later in the evening a dozen or so TIRA members showed up at San-chang Precinct Station to demand that their cohorts be released but were rebuffed by police.