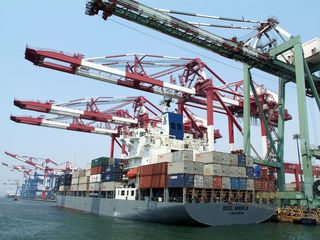 The NDC cited statistics compiled by the Ministry of Transportation and Commission as saying that cargo throughput of Kaohsiung Harbor totaled 10.59 million twenty-foot equivalent units (TEUs), a new record high, up 6.6 percent from a year earlier. The TEU is a measurement of the capacity of a container vessel.

The NDC said that the data showed that China is a formidable emerging power in the global marine cargo industry.

To help Taiwan's seven commercial harbors take on rising competition from their counterparts, the NDC said, the government is investing a total of NT$64.61 billion (US$2.04 billion) during the 2012-2016 period to strengthen facilities at these ports. The seven ports are: Keelung, Taipei, Taichung, Anping, Kaohsiung, Suao and Hualien.

So far, the budget of the harbor upgrade plan has been about 50 percent spent and construction will continue, the council said.

Taking Kaohsiung as an example, the NDC said that the first phase of construction of the harbor's international container terminal has been completed on a build-operate-transfer basis. The investment is expected to boost Kaohsiung's cargo throughput by more than 3 million a year, the NDC said.

The on-going construction of the second phase of the new Kaohsiung terminal is scheduled to be completed in 2019, when the harbor is expected to have an oil storage tank, the NDC said.