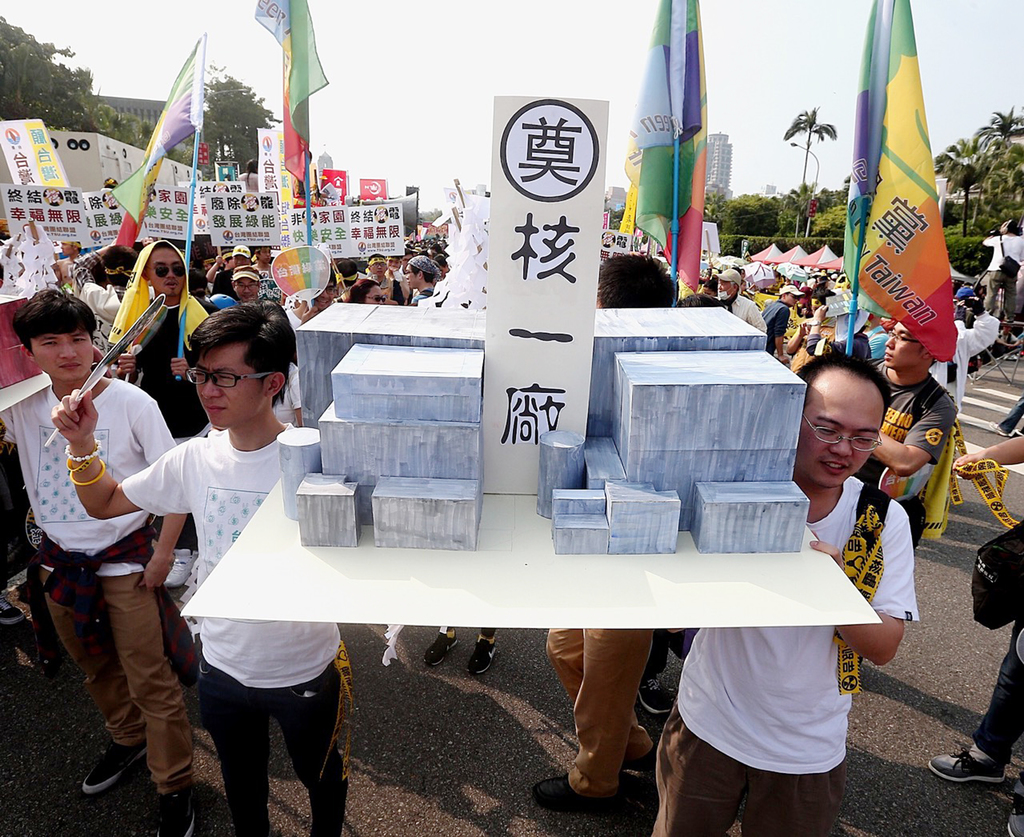 TAIPEI (Taiwan News) – Tens of thousands of opponents of nuclear energy marched in four Taiwanese cities Saturday for the annual commemoration of the 2011 Fukushima nuclear disaster.
The themes of the protest included saying goodbye to nuclear energy, developing alternatives and opposing the storage of nuclear waste near communities which do not want it.
“Accompany nuclear energy on its final mile out” was the theme of the Taipei event, with a 3.4-kilometer march Saturday afternoon departing from and arriving back at Ketagalan Boulevard, the wide tree-lined road in front of the Presidential Office Building. Before the march started, singers already performed on stage for the numerous supporters turning out early.
A spokesman for the organizers said that as the danger of the fourth nuclear plant had faded, Saturday was the time to have a peaceful garden party event to emphasize the alternatives to nuclear power.
More than 90 civic organizations were taking part in the Taipei event, reports said. The march was split up in several groups, each with a theme of its own. The first one concentrated on saying goodbye to nuclear energy, with its victims as the main group of participants. The second group comprised families and teachers and took “use love to make energy” as its slogan, with couples on tandems putting the concept into practice to produce energy. The bikes powered a blender which produced fruit juice.
Taipei citizens, students and celebrities were supposed to march in the third group to promote lower carbon emissions. A fourth group comprised social action movements marching for alternative energy, while politicians were supposed to promote “energy democracy” in a fifth and final group.
Estimates during the evening put the total of participants in all of Taiwan at around 50,000, including 30,000 in Taipei, 13,000 in Kaohsiung, and 7,000 in Tainan, the Chinese-language Liberty Times reported.
In the capital, over 220 police officers were mobilized to maintain order. In contrast to previous years, the area surrounding the Presidential Office had not been blocked with barriers and barbed wire, reports said.
Opposition Democratic Progressive Party leader Tsai Ing-wen, who is likely to be a candidate in next January’s presidential election, walked along at the head of a strong party delegation and reiterated the party’s aim to turn Taiwan into a nuclear-free homeland by 2025. Former DPP Chairman Lin Yi-hsiung, whose hunger strike last year led to the government stopping work on the fourth nuclear plant, was present at the head of hundred people wearing white shirts, black pants, and straw hats.
Other prominent opposition politicians such as former premiers Frank Hsieh and Yu Shyi-kun were also present, as were the mayors William Lai of Tainan and Cheng Wen-tsang of Taoyuan.
A similar march also took place Kaohsiung beginning from Aozidi Park. “Drop nuclear energy and start a new life,” was the main slogan for protesters in the main city in Southern Taiwan. About 5,000 participants appeared at the start of the event, reports said. Of the country’s three operating nuclear power plants, two are on the north coast in New Taipei City while the third stands in Pingtung County.
In Tainan, young people wearing black played out a skit symbolizing the end of the world as caused by a nuclear disaster. The protest in the southern city emphasized health and sustainable energy.
The fourth city to host a commemorative event was Taitung in the southeast. Taitung County includes remote Orchid Island, which houses radioactive waste, and sites which could be selected as the next home for more such waste.
Protesters from Taitung also traveled to Kaohsiung to explain their position against the damage caused by nuclear waste, reports said.
In a reaction to the protests, the Ministry of Economic Affairs said it understood the concern felt by the marchers, but added it could not just simply abandon any form of energy production. The ministry said it has already expanded its aims for the use of alternative forms, including solar energy, several times. By 2020, the green energy sector would employ 100,000 people, according to the government.