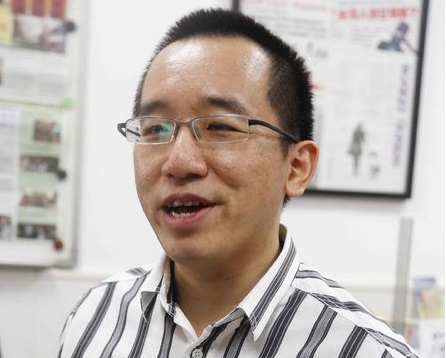 TAIPEI (Taiwan News) – Chen Chih-chung, the son of ex-President Chen Shui-bian, announced Friday he was giving up his attempt to run for a seat in the Legislative Yuan despite leading by 10.5 percent in opinion polls.
The younger Chen’s candidacy was contested from the start because his father was sentenced to 20 years in prison on a range of corruption charges. The former head of state was released on medical parole last January.
After a long and difficult application process to rejoin the Democratic Progressive Party, Chen Chih-chung became eligible to run for election again, but last week, it was revealed that DPP spokeswoman Hsu Chia-ching had alleged during a visit to the United States last month that prominent developers had paid hundreds of millions of New Taiwan dollars to his father when he was president.
Even though Hsu resigned, saying her memory had played tricks on her, Chen still faced pressure from many sides.
On Friday, he issued an online message saying he would join Kaohsiung Mayor Chen Chu, no relation, at a news conference to announce his decision he would “consider the wider picture” and not participate in the next legislative elections, which are expected next January on the same day as the presidential election.
He said that despite leading opinion polls by 10.5 percent, he faced too much pressure. “The factions, the media, the blue camp, they all intervened too deeply,” he wrote online, seemingly implying that his opponents within the DPP, the media and the ruling Kuomintang had interfered to try and remove him from the race.
Chen described himself as a “lifelong volunteer for Taiwan” and said he did not want his parents to suffer under the strain his campaign would bring.
He had planned to take part in DPP primaries in an election constituency covering the Kaohsiung districts of Qianzhen and Xiaogang. He faced city councilor Chen Hsin-yu, widely considered as an ally of former Kaohsiung Mayor and ex-Premier Frank Hsieh, and former city government official Lai Juei-lung, who is close to Mayor Chen.
On Thursday, Chen Chih-chung denied that his father was involved in brokering a deal with the mayor which would involve both him and Chen Hsin-yu dropping out of the race.
Friday’s news conference was attended by both the mayor and Lai, with Chen Chih-chung praising the latter.
In a reaction, former Vice President Annette Lu, who served with President Chen from 2000 to 2008, attacked Hsu for having destroyed his son’s future. Other prominent DPP members called on the party to expel the former spokeswoman and Taipei City councilor.