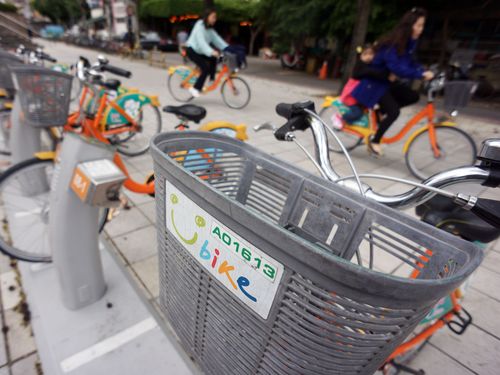 Taipei, Jan. 11 (CNA) Taipei has decided to scrap its policy of not charging for the first 30 minutes of rides using the city's popular bicycle rental system, the city announced Wednesday.
YouBike, which saw ridership surpass 30 million last October, will start charging NT$5 (US$0.16) for the first half hour of each ride from April 1, the city's Department of Transportation said.
Neighboring New Taipei, however, will maintain the free ride policy for the first 30 minutes, the department said.
The new policy could cause confusion because YouBike bicycles used in Taipei and New Taipei can be borrowed in one city and returned in the other, but the department said the fee charged will be based on the city in which the bicycle was rented.
Taipei officials said they held several discussions with New Taipei representatives to try to unify their policies, but New Taipei said it wanted to maintain the free 30-minutes policy to continue to encourage green transportation.
Under the current fee system for members, renting a bike costs nothing for t he first half hour, NT$10 (US$0.31) per half-hour for the next three and a half hours, NT$20 per half-hour for the next four hours, and NT$40 per half-hour after that.
The city government subsidizes the policy of offering the first 30 minutes of rides for free to the tune of NT$150 million a year, but it decided to make a change because the program was running out of funds.
Despite high YouBike ridership, revenues have lagged because most riders return the bike within 30 minutes. (By Huang Li-yun and Lilian Wu)