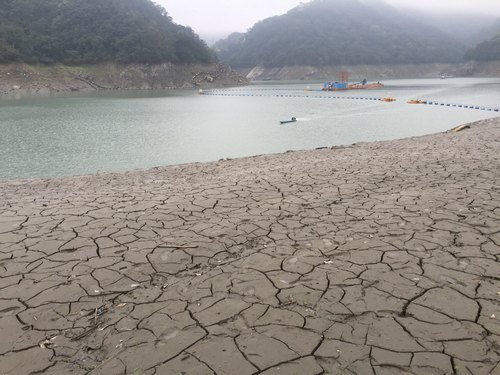 Taipei, March 7 (CNA) Shimen Reservoir, which supplies water for residents in Taoyuan and the western part of New Taipei City, saw a record-low water level on Saturday, amid Taiwan's worst drought in 10 years.
The reservoir currently stores some 50.6 million tons of water, only one-quarter of its total capacity, according to the Water Resources Agency (WRA). If there is no increase in rainfall in coming days, areas served by the reservoir could face a dire situation as Shimen supplies an average of 1.75 million tons of water each day, it said.
If no significant rain falls in the near future, a situation forecast by the Central Weather Bureau, as many as 1.51 million households in the areas will be affected, the agency said.
It means that a third-phase water rationing will be launched before May to cut the water supply to entire areas on a rotating basis, the WRA explained. In Taiwan, first-phase water rationing means reduced water pressure at night, while second-phase means the water supply is restricted for consumers who usually use more then 1,000 cubic meters per month.
The western part of New Taipei as well as Taoyuan, Hsinchu, Miaoli, Taichung, Tainan and Kaohsiung cities and counties began the second phase of water rationing on Feb. 26.
As of March 5, the water level of the reservoir was the second lowest since it went into operation in 1964, a WRA official said.
Sediment removal work in the upstream of Shimen Reservoir has been carried out in hopes of retaining more water when it rains. (By Huang Chiao-wen and Lee Hsin-Yin)