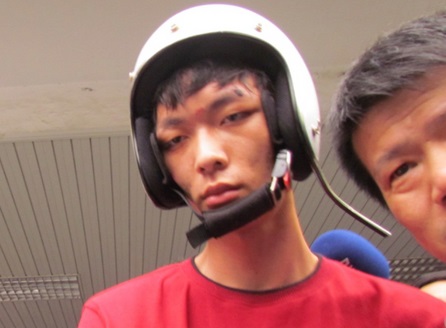 TAIPEI (Taiwan News) – Cheng Chieh, the student accused of killing four people and injuring 22 on Taipei’s Mass Rapid Transit last year, received one death sentence for each of his fatal victims, the New Taipei District Court announced Friday.
Appeals are possible, while the court also turned down a request from Cheng through his attorney to stay away from the announcement of the verdict.
Cheng, at the time a 21-year-old student at Tunghai University in Taichung, produced a 30-centimeter-long fruit knife on an MRT train on its way from Longshan Temple Station in Taipei City to Jiangzicui Station in New Taipei City last May 21, and attacked random passengers. He was overpowered and arrested after the train arrived at Jiangzicui.
The court found him guilty on four counts of homicide and 22 counts of attempted homicide, reports said.
Cheng never showed any remorse, even telling interrogators that he would have killed his own parents had they been on the train, reports said. He had reportedly wanted to “do something big” from childhood, with the media reporting other incidents that he had a potentially violent streak.
The attack resulted in a stepped-up police presence in the MRT system, with officers standing guard at each station and traveling on trains.
On Friday morning, Cheng’s attorney filed a request with the court so he could stay away from the pronouncement of the verdict during the afternoon, but it was turned down. In principle, a suspect in detention had to be present at the announcement of the verdict, the judges ruled.
According to the Chinese-language Apple Daily, Cheng had told visitors that he did not care whether or not he was sentenced to death.
If the appeals process runs smoothly, a final verdict might be expected within a year, according to media estimates. Relatives praised the judges’ decision and expressed the hope that the case could move forward quickly.