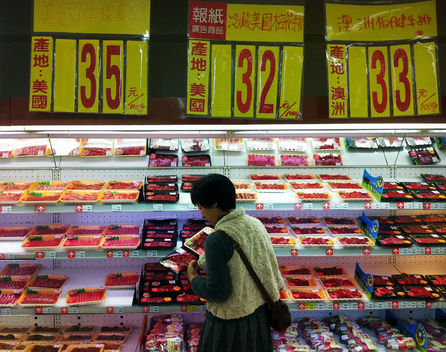 Minister of Economics John Deng took part in a seminar at the Japan Association for Trade and Industry Wednesday, pausing afterward to comment on the issue of imports of US beef offal into Taiwan. He noted that the Minister of Economic Affairs (MOEA) has scheduled a 30-day period in which people in the community are encouraged to express their views on opening up the Taiwan market to such imports.

The MOEA is currently still debating whether to open up the island’s market to imports of six categories of US beef into Taiwan, including non-cranial bone marrow, blood vessels, head muscle, cheek muscle, esophagus muscle, and tallow. Deng said earlier this year that these six categories are not considered offal and thus there should be no problems in importing them. In the past, he explained, traders have been reluctant to bring in such products because the wording of statutes regarding their import was not specific enough.

Deng emphasized that the MOEA’s proposal does not mean that when the 30-day trial period is over imports will automatically be allowed. He emphasized that the ministry will examine the views of the public make appropriate changes in its proposal in accordance with their comments. He added that if imports are okayed, such products will only be allowed in under a strict system of inspection.

A spokesperson for the Homemakers’ Union Foundation (HUF) warns consumers that importing and consuming some beef products can increase the risk of mad cow disease and other ailments that threaten food security. Secretary-General Lai Hsiao-fen of HUF says she believes the MOEA intends to open up Taiwan’s market to imports of the six beef products despite concerns that much US beef contains residues of the growth hormone clenbuterol. She cautioned that the ministry is "playing with words in order to persuade people to accept its proposal."

Lai stresses that the six beef products in question are all soft tissue that are susceptible to mad cow disease pathogens. In addition, concentrations of clenbuterol residues in US meat are higher than normal. If imports of these products are allowed, she says, consumers could end up ingesting unwelcome meats and additives unknowingly.
,
Jiang Yu-mei, Director of Taiwan’s Food and Drug Agency, disagrees, saying that following discussions with experts in BSE and other related diseases, the agency has concluded that materials such as bone marrow and the other five categories are not classified as internal organs, nor are they considered specific risk materials (SRM). Thus these items can be imported in compliance with the provisions of the Food Safety and Health Management Act.

Yang Shu-mei, a Deputy Director of at MOEA, adds that it should not be assumed that every cow might contract mad cow disease. She says testing of North American offal imports into Taiwan would be extremely strict, but stressed that people are still welcome to express their views.

The MOEA opened up lines to the Board of Foreign Trade (BOFT) February 18 and will accept comments from the public on the subject until March 19. HUF also urges the public to utilize this opportunity to telephone (02-23977364), email (boft@trade.gov.tw) or fax (02-23970522) BOFT to express their views on the proposal to open up Taiwan’s market to these six US beef products.