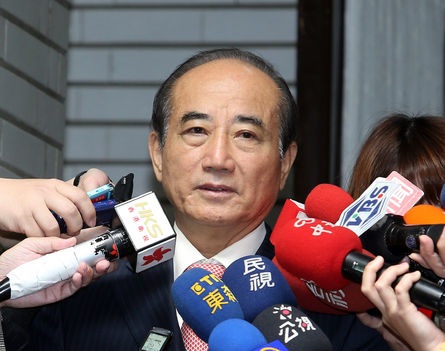 TAIPEI (Taiwan News) – Legislative Speaker Wang Jin-pyng said Tuesday four conditions needed to be fulfilled before he would consider visiting China.
The news of a rumored invitation of Wang by the Chinese leaders was launched by a talk show guest Monday, but was not confirmed by any side.
Responding to questions from reporters about the item Tuesday, Wang listed the four conditions he wanted to see before he would accept an invitation, even though he said he had regularly met with Chinese officials who had invited him over.
If the country needed it, if public opinion agreed, if the Legislative Yuan decided in favor, and if he was treated with equality and respect, then he would accept an invitation, Wang said.
Those four conditions had not been met on any occasion yet, so he had not accepted any of the invitations, he told reporters.
The rumors about plans for a China trip accompanied speculation about Wang considering a bid for the Kuomintang’s presidential nomination in the January 2016 election.
Several key KMT leaders, including honorary chairmen Lien Chan and Wu Po-hsiung, visited China several times, but Wang, who has held the same office since 1999, never traveled across the Taiwan Straits.
KMT Chairman Eric Liluan Chu is due to visit Hong Kong and Singapore beginning later this week.
Wang has been the focus of bitter party infighting over the past 18 months or so, with President Ma Ying-jeou trying to eject him from the KMT over allegations of influence peddling. After Wang won every legal case, Chu decided to drop further legal action, provoking Ma to issue a strong statement expressing his disagreement with the decision of his successor as party leader.
Ma, Chu and Wang appeared at a KMT event together Monday in an effort to dispel rumors of a deep rift.
Chu has repeatedly denied he was interested in running for president, while other potential candidates include Wang, Vice President Wu Den-yih and former Taipei City Mayor Hau Lung-bin.
Former presidential aide and close Ma confidant Lo Chih-chiang recently said he would quit the KMT if it ever nominated Wang as its presidential candidate.