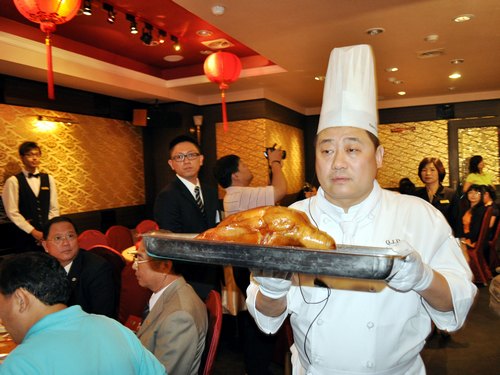 Taipei, March 3 (CNA) World famous roast duck brands from Beijing have sucessfully established presences in Taiwan by forming joint ventures with local partners in northern and southern Taiwan.
The branch of the Evergreen Resort Hotel in Chiaohsi in Yilan County has since March 1 been offering authentic Peking roast duck in cooperation with the Beijing-based Quanjude roast duck restaurant.
Using 57-day-old ducks weighing 2.1-2.4 kilograms bred at the Cherry Valley in Hualien County, the hotel said it will offer roast ducks of the same high quality by adopting the same roasting techniques used by the 150-year-old Quanjude.
Through April 15, 40 ducks will be served each day and hotel guests will get the chance to relish the tasty dish so well-known across the globe.
In an effort to allow customers to enjoy the dish, the master chef also recommended two different ways of tasting the bird --either with the skin or without the skin. Customers will be able to enjoy the crispiness of the skin and the tenderness of the meat if they eat them separately, the chef said.
Quanjude Chairman Wang Zhiqiang said in late December in Taiwan that he hopes to open 4-6 chain stores here and has plans to bring in dishes from China's imperial past. Opening stores in Taiwan will be his group's first step to going international, he said.
On Monday, Bianyifang Surfing Duck -- the oldest roast duck restaurant in Beijing -- announced that it will open its first overseas branch for a trial run in Kaohsiung Wednesday in collaboration with Hebian Food and Beverage Group after six years of negotiations.
To offer local customers the best roast duck experience, they will use locally raised birds for the dish, Hebian Group CEO Chang Su-luan said.
The 600-year-old Bianyifang has 33 stores across China and its Kaohsiung branch is located at the Banana Pier's seaside ballroom.
Quanjude and Bianyifang are the most well-known roast duck restaurants in Beijing.
(By J.F. Shen and Flor Wang)