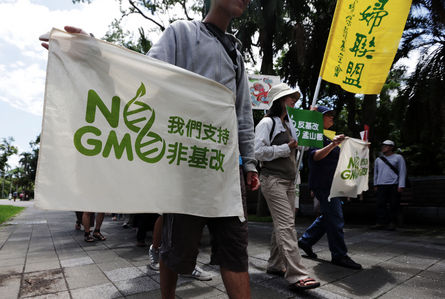 Taiwan Food and Drug Administration’s (FDA) announcement of a plan to amend laws concerning the labeling of genetically modified (GM) food products has once again brought the genetically-modified food issues back to the table and is heating up the debate on the island.

Taiwan FDA plans to implement the amended food labeling law in June at the earliest, far ahead of the scheduled January 1, 2016 timetable. In the new rule, food manufacturers should clearly state all food products and additives on the packages. It requires manufactures to state “genetically modified ingredients contained” on the package if the genetically modified ingredients account for more than three percent of the total ingredients of food products from the existing five percent required.

Soon after the announcement, a Taiwanese American lawyer, who is currently working for a well-known consumer advocacy group for food safety, shared some facts regarding the practice in Hawaii. The Washington-based Center for Food Safety Staff Attorney Sylvia Wu expressed her deep concern over Taiwan government’s genetically modified food policy that will bring harm to the land and the health of locals.

Attorney Wu specializes in environment and food. The organization she is working for has been taking active role in helping Hawaii defend the law against the Biotechnology Industry Organization – the association for biotech companies like Monsanto and Dow Chemical. She shared her thoughts from dealing with cases in Hawaii, United States on Liberty Times, urging the competent authorities in Taiwan to avoid repeating case of history. According to Wu, some Hawaii residents have been suffering from respiratory and other chronic diseases after long-term exposure to the spread of chemicals sprayed on the herbicide and pesticide resistant crop developed by agrochemical firms over the past few years. A few acute illnesses of groups of school children were reported soon after farm chemicals were sprayed at a nearby genetically-modified crop farm.

Dr. Guo Hua-ren of the Department of Agronomy, National Taiwan University indicated that the side effects of genetically engineered foods should be carefully watched. “Whether the gene of the GM crops would change and subsequently its composition of nutrients should be observed. The mutation is also likely to induce an allergic reaction,” said Guo.

Prior to the announcement of the new regulations, Luis Ko, the general manager of I-Mei Foods Company, warned in a public letter in early February that as Taiwan is a relatively small country, it would be harmful to our agricultural lands once the genetically modified commercial crops is massively introduced. Ko has also urged the government to think carefully about the consequences of giving green lights to the marketing, sale, and planting of genetically modified foods.

According to the new regulations, the print on the labels must be over 5 millimeters. Both agricultural products and processed foods must list any genetically modified ingredients, said Pan Chih-kuan, director of the FDA's Food Safety Division. The effective date varies with items. Agricultural products and raw materials will be subjected to the new regulations starting June this year and the rest including bean curd and tomato sauce will be subjected to the change starting October 2015 or January 2016.