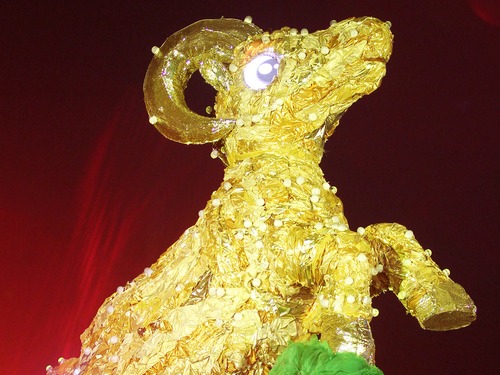 Taipei, Feb. 27 (CNA) Taiwan began to celebrate the Lantern Festival Friday, with cities and counties illuminated with lights and fireworks in a series of shows that will run through mid-March.
The 2015 Taipei Light Festival kicked off at the Taipei Expo Park, featuring a golden goat-shaped lantern to celebrate the Year of the Goat. Visitors can enjoy not only the 12.5-meter-tall main display but also music and light shows staged every 30 minutes from 7 p.m. through 11 p.m. during the festival, which ends March 8.
The annual Taiwan Lantern Festival also began Friday, held this year in the central city of Taichung at three different venues -- in the city's Wuri and Fengyuan districts and the historic Taichung Park.
All three locations showcase lanterns made for the Year of the Goat, with the main display in Wuri District, at 23.4 meters tall, scheduled to be launched March 5.
In southern Taiwan, people in Yunlin County, Tainan and Kaohsiung are treated to the sights and sounds of their own respective lantern festivals. In Tainan, the annual Yue Jin Lantern Festival in Yanshui District expanded this year to feature 40 lanterns created by craftsmen from home and abroad, up from 24 last year.
The lanterns are installed around a lake and historic alleyways and popular tourist sites as part of the festival that lasts until March 15. In Kaohsiung, visitors can feast their eyes on laser shows on water screens and fireworks displays over the Love River. Fourteen artisan lanterns adorn areas along the landmark river and the city's Central Park.
The 23-day 2015 Kaohsiung Lantern Festival will run through March 15. Hualien City is hosting a lantern festival on the east coast, dazzling visitors with light and water shows accompanied by music.
Traditional red lanterns are arranged around the city and towns around the wider Hualien County to light up main roads, railway stations and squares.
In outlying Penghu County, fishermen in Shiyeu Township celebrate the Lantern Festival in their own unique way.
On the Lantern Festival, fishermen take a day off and put up lanterns and lights on their boats at Wai-An Fishing Harbor, brightening the port with over 1,000 lanterns and lights. (By Scully Hsiao)