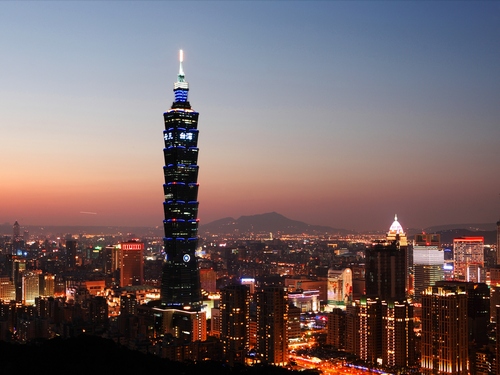 Taipei, Feb. 26 (CNA) An alleged terror threat by the extremist group Islamic State (IS) against Taipei, posted on Twitter, has been noted and is being taken seriously by the United States, the American Institute in Taiwan (AIT) said Thursday.
"When Islamic State attacks your cities it won't look nice. By the permission of Allah that day is not far," read the post, which was accompanied by a photo showing the iconic Taipei 101 skyscraper on fire.
The message and photo were posted Feb. 24 on Twitter with the hashtag FreeShamiWitness@KhilafahTimes.
"We have seen reports of the social media posting showing Taipei 101, and of course take seriously any threat against the welfare of people anywhere," said Mark Zimmer, spokesman for the AIT, which represents U.S. interests in Taiwan in the absence of bilateral diplomatic ties.
He also told CNA that the United States and Taiwan have a robust cooperative relationship "in all areas, including security," but he did not elaborate on the anti-terrorism cooperation between the two sides.
"We will continue all of our mutual efforts to prevent the further spread of violent extremism," Zimmer said.
Taiwan has been on heightened alert since the Twitter post appeared and the authorities have said that they have put an emergency response mechanism in place. The government is trying to verify the authenticity of the post, they said, urging the public not to panic.
Taiwan is part of the Global Coalition to Counter the Islamic State of Iraq and the Levant, and has provided humanitarian assistance to refugees displaced by IS's onslaught.
Islamic State is a radical militant group that controls swathes of territory in Syria and Iraq and employs brutal tactics such as mass killings, abduction of members of religious and ethnic minorities, and the beheading of foreign journalists and aid workers.
More than 60 partners have joined the U.S.-led global coalition, including Japan, France and the United Kingdom, in an effort to defeat the Islamic State and provide humanitarian assistance to refugees in the region. (By Elaine Hou)